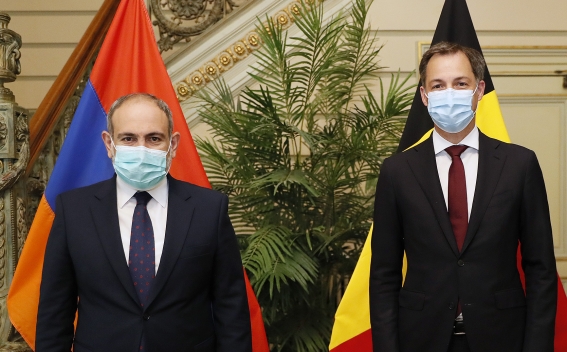 The parties stressed the importance of continued development of political and economic relations between Armenia and Belgium, including through high-level contacts. Nikol Pashinyan and Alexander De Kroo reaffirmed their governments’ interest in boosting trade and economic exchanges, investments, implementing joint programs in various sectors of the economy, as well as promoting democratic reforms in Armenia. The need for effective implementation of the CEPA Roadmap was emphasized on both sides.

The parties went on to discuss Armenia’s reform agenda, dwelling on the ongoing police reform. Alexander De Kroo prioritized the implementation of democratic reforms and stressed the EU's commitment to continue supporting Armenia in the reform process. Highlighting the development of economic ties with Armenia, Alexander De Kroo advised that a Belgian trade mission is going to visit Armenia to explore the prospects and opportunities for developing trade and investment relations between the two countries. The visit is planned in parallel with the celebrations of the 100th anniversary of the founding of Belgium’s Armenian community.

During the meeting reference was made to Azerbaijan’s provocative actions on the Armenian-Azerbaijani border. The interlocutors stressed the need for Azeri troops to leave the sovereign territory of Armenia facilitating thereby the peaceful settlement of the situation. The Belgian Premier noted that he is concerned about what is going on in the region and reassured that the matter shall be kept in the spotlight.

Both sides stressed the need for ensuring the repatriation of Armenian POWs held in Azerbaijan and resuming the Nagorno-Karabakh conflict settlement process within the OSCE Minsk Group framework.

After the private talks, the interlocutors continued the meeting in the format of a working lunch.