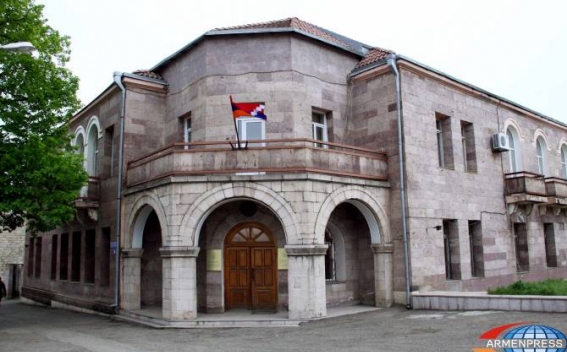 Artsakh Foreign Ministry has issued a statement on the illegal visit of Parliament Chairmen of Azerbaijan, Turkey and Pakistan to the occupied territories of Artsakh.

Armenpress presents the full text of the statement:

“We reiterate the inadmissibility of Azerbaijan's attempts to consolidate the illegal occupation of the territories of the Republic of Artsakh, which were seized as a result of the 44-day aggression unleashed by Azerbaijan with the direct participation of Turkey and international terrorists in September 2020. Any actions aimed at making legitimate the results of the violations of international law and the illegal use of armed forces should be strongly condemned.

One of such blatant examples of Baku's policy of creating the basis for recognizing its illegal actions as an acceptable norm is the visit of the chairmen of the parliaments of Azerbaijan, Turkey and Pakistan to the town of Shoushi, which is under temporary Azerbaijani occupation.

We consider it necessary to note the unacceptability and provocative nature of such visits by officials of Azerbaijan and other countries to the occupied territories of the Republic of Artsakh, as they are a gross violation of international law, a challenge to the civilized world and aim to exclude the possibility of creating prerequisites for a comprehensive settlement of the Azerbaijan-Karabagh conflict.

We reiterate the inviolability of the position of the Republic of Artsakh that the restoration of the territorial integrity and acquisition of international legal personality by Artsakh are indispensable conditions for achieving a comprehensive settlement of the conflict and establishing lasting peace in the region”.