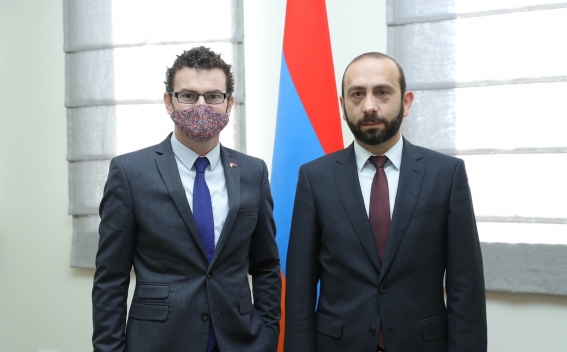 On October 20, the Minister of Foreign Affairs of Armenia Ararat Mirzoyan received the Ambassador of the United Kingdom to Armenia John Patrick Gallagher, press service of Armenia's MFA reports.

Minister Mirzoyan expressed gratitude for the United Kingdom's continued support to the democratic reforms in Armenia, the strengthening the rule of law, as well as the fight against corruption.

The interlocutors exchanged views on the issues of Armenian-British bilateral agenda, emphasizing the areas of trade, science, high technologies and tourism as prospective directions of cooperation.

The sides also discussed the 26th Summit of the United Nations Climate Change Conference (COP26), which will be held in November of this year, in Glasgow, Great Britain, as well as issues related to the participation of the Armenian side. In this context, both sides emphasized the combination and consolidation of efforts of states to combat climate change.

Touching upon issues on regional security and stability, Minister Mirzoyan stressed the importance of a lasting and comprehensive settlement of the Nagorno Karabakh conflict under the mandate of the OSCE Minsk Group Co-Chairmanship. Ambassador Gallagher underlined that the United Kingdom supports the format of the OSCE Minsk Group Co-Chairmanships.

The Foreign Minister of Armenia also stressed the need for unimpeded access of the international organizations of the implementation of humanitarian missions in Artsakh.