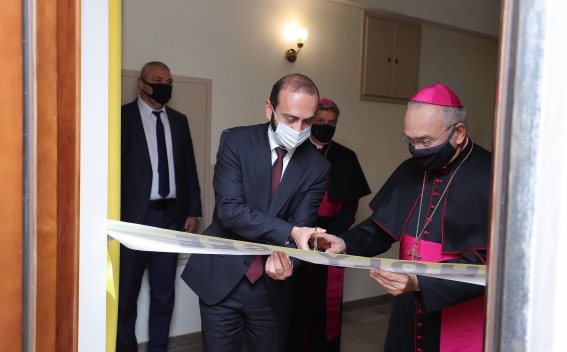 Foreign Minister Ararat Mirzoyan and Substitute for General Affairs of the Secretariat of the Holy See Archbishop Edgar Peña Parra delivered remarks on the occasion of the opening of the Apostolic Nunciature.

In his speech, Minister Mirzoyan, in particular, noted.

Today is, indeed, a symbolic day․ The Holy See opens a resident apostolic nunciature in the heart of the first Christian nation, which marks the beginning of the new stage of the cooperation between Armenia and the Holy See. We highly appreciate this decision of His Holiness Pope Francis, which once again demonstrates the attitude of His Holiness the High Priest to the Armenian-Vatican interstate relations.

Another demonstration of the strong solidarity between Armenia and the Holy See is the confession of the honorary title of "Doctor of the Ecumenical Church" and as one of the 36 greatest thinkers of the Catholic Church to the genius son of the Armenian people - St. Gregory of Narek, as well as the solemn opening of the statue of St. Gregory of Narek in the Vatican Gardens. I should also mention the Mekhitarist Congregation, which has a significant role in the development of the educational, scientific, cultural life of the Armenian people and consolidating the value and spiritual links between Armenia and the Vatican.

Today, on behalf of Armenia and the Armenian people, I would like to once again express gratitude to the Holy See for adopting an unequivocal and principled position on the Armenian Genocide, thus contributing to the process of prevention of such crimes in the future.

We also highly appreciate the calls of His Holiness during and after the war  unleashed by Azerbaijan against the peaceful population of Artsakh, as well as on the immediate release of the prisoners of war.

Armenia's relations with the Vatican have always been marked by a high-level political dialogue, based not only on Christian values, but also on a common historical and religious heritage, and similar approaches to the challenges of the modern world.

Indeed, our historical relations and ties come from the depths of centuries, but they got a new impetus after the declaration of independence of the Republic of Armenia. Guided by the determination of further deepening our bilateral relations, Armenia established a resident Embassy in the Holy See in 2013. And today, with the opening of the Apostolic Nunciature, the Vatican demonstrates its readiness to further develop the relations, to deepen the existing cultural and religious ties between our two countries.

We will celebrate the 30th anniversary of the establishment of diplomatic relations between our countries next year, which will be a good opportunity to outline the steps aimed at ensuring the further development of the relations between Armenia and the Vatican.

I once again congratulate all of us on the occasion of the opening of the resident nunciature of Holy See.