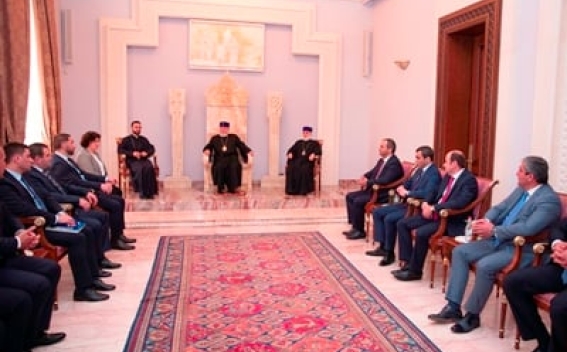 His Holiness Garegin II, Supreme Patriarch and Catholicos of All Armenians, received today Prosecutor General of Georgia Irakli Shotadze and his delegation.

At the meeting Irakli Shotadze presented to Catholicos of All Armenians Garegin II the close cooperation between the Offices of the Prosecutor Generals of Armenia and Georgia.

In his remarks Garegin II praised the fact that the partnership between Armenia and Georgia is further deepening and expanding in the past decades, in accordance with the centuries-old friendship of the two peoples. His Holiness Garegin II said that the Armenian and Georgian peoples have managed to overcome numerous difficulties by preserving their national identity. He wished that the cooperation between the two nations will be effective and will contribute to the development, progress of the two friendly states.

The Catholicos of All Armenians also conveyed his brotherly greetings and wishes to Catholicos-Patriarch of All Georgia Ilia II.

In his turn the Georgian Prosecutor General said such visits contribute to further intensifying the mutual relationships between the state structures of the two countries.