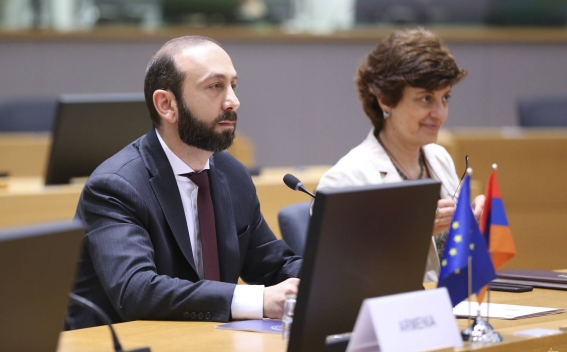 On May 18, the Armenia-EU Partnership Council met for the fourth time in Brussels - for the first time since the Comprehensive and Enhanced Partnership Agreement (CEPA) entered into force on 1 March 2021. The meeting took place in a particularly difficult international context that has created multiple challenges to both the EU and to Armenia in terms of security and economic stability.

The Partnership Council reviewed the implementation of CEPA, which covers a wide range of cooperation sectors in political, economic and trade areas, and welcomed the progress achieved. The EU welcomed Armenia’s commitment to CEPA implementation, appreciated positively the reforms undertaken and encouraged the government to pursue its reform agenda to the benefit of Armenian citizens, which the EU fully supports.

The Partnership Council reiterated the shared commitment of Armenia and the EU to human rights, fundamental freedoms, the rule of law and democratic principles. The Partnership Council welcomed the accomplishments to date in the implementation of Armenia’s national strategy for judicial and legal reforms and its national anti-corruption strategy, while acknowledging that challenges remain. The EU is engaged in a constructive policy dialogue with Armenia and provides significant financial and technical support to these reforms efforts. The EU is committed to work with Armenia to make further progress towards freedom of the media and freedom of expression, as well as on the fight against discrimination.

In the area of transport, the Partnership Council welcomed the signature of the Common Aviation Area Agreement on 15 November 2021. With this agreement, both sides engage in a process to improve Armenia’s aviation safety that may gradually lead to Armenia’s inclusion in the EU’s aviation market with new air transport opportunities, more direct connections and economic benefits to both sides.

The Partnership Council noted that, following its graduation from the Generalised Scheme of Preferences, Armenia can no longer benefit from the generous access to the EU market offered by the scheme. It however highlighted that while CEPA did not provide for preferential tariffs for trade in goods, it contained important potential for benefitting bilateral trade flows that should be fully exploited.

The Partnership Council agreed that nuclear safety was a priority and took note of Armenia’s progress in this regard and of Armenia’s commitment to fully implement the National Action Plan adopted as a part of the EU supported stress test process. It also reaffirmed the importance of combating climate change under the Paris Agreement and in accordance with the CEPA. To this end, the EU welcomed Armenia’s updated Nationally Determined Contribution targets and encouraged Armenia to adopt a Long-Term Low Emissions Development Strategy, aiming at reaching climate neutrality by 2050, in line with the EU’s commitment.

The Partnership Council welcomed Armenia-EU cooperation in the areas of employment and education, underlining the importance to amend the Labour Code and revise legislation on trade unions and employers to further align the Armenian legal framework with the International Labour Organisation fundamental conventions. The EU encouraged Armenia’s efforts to adopt the new education strategy and reiterated its interest to strengthen cooperation with the Armenian authorities on Education, Training and Youth strategies. The Partnership Council expressed appreciation for the successful cooperation on Erasmus+ and welcomed the association of Armenia to the EU programme Horizon Europe that will allow the continuation of the participation of Armenian researchers and research entities to European Research and Innovation projects.

The Partnership Council took note of Armenia’s willingness to start a visa liberalisation dialogue with the EU. The EU noted the overall good implementation of the Visa Facilitation agreement and of the Readmission agreements and invited Armenia to sustain its efforts.

The Partnership Council agreed on the importance of the Eastern Partnership framework as an essential cooperation platform. It also reiterated that the fundamental issues of democracy, good governance, rule of law, fight against corruption, human rights and gender equality remained the cornerstone of the Eastern Partnership policy framework. The Partnership Council noted that Armenia stood to benefit from the Eastern Partnership’s agenda of recovery, resilience and reform, and from the ambitious Economic and Investment Plan (EIP) with flagship initiatives determined by EU and Armenia, underpinning this agenda that will provide support to stimulate jobs and growth, support connectivity, the green and digital transition, education and development of southern regions.

The Partnership Council was chaired by the Minister of Foreign Affairs of the Republic of Armenia, Mr Ararat Mirzoyan, and the EU delegation was led by the High Representative and Vice President of the European Commission, Mr Josep Borrell. The Commissioner for Neighbourhood and Enlargement, Mr Olivér Várhelyi also participated in the meeting.