Macron, Scholz and Draghi arrive in Kyiv for Historic Visit 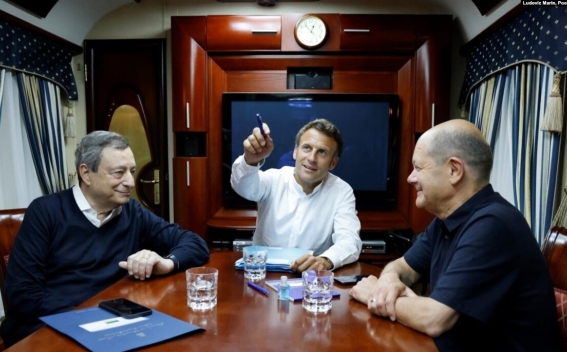 French President Emmanuel Macron, German Chancellor Olaf Scholz and Italian Prime Minister Mario Draghi arrived in Kyiv on Thursday for their first visit to Ukraine since the Russian invasion, a day after the United States announced 1 billion dollars worth of new arms for embattled Ukrainian forces, Le Monde reports.  Their first also comes as Kyiv is pushing for membership of the EU.

The leaders arrived on a special train from Poland, with AFP images showing them descending onto a platform in the Ukrainian capital. Mr. Macron said they will meet President Volodymyr Zelensky and go to "a war site where massacres have been committed." The French leader has called alleged Russian atrocities in towns near Kyiv "war crimes." "This is a message of European unity addressed to Ukrainian men and women, of support," Mr. Macron said as he descended from the train.

He said he came "to talk about both the present and the future since the coming weeks, we know, will be very difficult." The visit comes as Ukraine is pushing to be given official candidate status to join the European Union.

The trio had traveled onboard a special train that left Poland in the early hours of Thursday. German media said they had met "in the night" in Poland's south-eastern city of Rzeszow, which has an international airport. They arrived separately and met on board shortly after the train's departure. The French leader had just finished a visit to Moldova, one of Ukraine's neighbors. Romanian leader Klaus Iohannis is due to join his French, German and Italian counterparts in Kyiv later on Thursday.