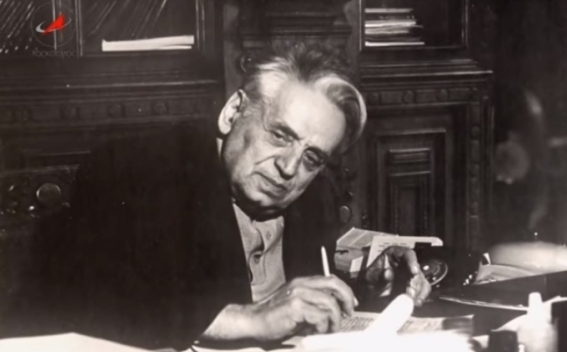 Andranik Iosifyan was born on July 21, 1905 in the village of Tsmakahogh, Artsakh in the family of a teacher. His grandfather was a priest. When Andranik was 5 years old, his father was invited to become the priest of the Armenian Church in Buynaksk (near Makhachkala).

Here the boy attended a Realschule, acquiring good knowledge in mathematics, biology and European languages. In 1918, when the massacres and pogroms of Armenians took place, and Turkish troops were approaching the city, the Iosifyan family decided to leave for Turkmenistan.

Later, the Iosifyan family returned to their native village, where Andranik’s father became the priest of the village after the death of his father.

After the establishment of Soviet power, Andranik, who knew Russian, was appointed as the secretary of the Komsomol cell in the village. When the church was closed Andranik’s father, in order to feed his family, opened a school and became its director and teacher.

In 1941 Andranik volunteered to the Red Army (Soviet Army). There he served as a telephone operator in the battalion of the Caucasian Army and at the same time studied at rabfak (workers' faculty).

In 1925, he continued his studies at the Baku Polytechnic Institute, specializing in electromechanics. After graduation from the institute, Andranik got a job in the electromagnetic laboratory of All-Union Electrotechnical Institute. For ten years of work, he developed small remotely controlled tankettes that could destroy enemy tanks.

This was followed by land electric torpedoes, synchronous rotation systems for artillery mounts of warships, artillery fire control systems and universal power systems for partisans and so on.

It should be noted that in 1937 Andranik’s father was arrested for unknown reasons and sentenced to death. As for the inventor himself, Andranik was expelled from the All-Union Communist Party of Bolsheviks and was demoted.

After many years of successful work on new inventions, the Soviet government reinstated Iosifyan in the party and promoted him to the post of director of Moscow State Factory No. 627.

During the Second World War, the factory was assigned the following tasks: equip the front with special electric machines and build electrical equipment with rockets and space objects.

It should be mentioned that Andranik Iosifyan has long been a ''secret'' scientist who worked exclusively on the instructions of the military departments. After many years of successful work, the largest Scientific and Research Institute of Electromechanics was created on the basis of the factory and Andranik Gevondovich directed it for more than 30 years.

During this period, the chief designer created electrical equipments for ballistic missiles, nuclear submarines, the Cosmos-122, Cosmos-144, Cosmos-156 experimental meteorological satellites, and the Omega and Meteor space satellites. Being one of the most outstanding figures in the field of military and rocket production, Andranik Iosifyan for about thirty years was the USSR's classified chief constructor of electrical equipment of ballistic rockets, nuclear submarines and spacecraft. One of Iosifyan's most important inventions, noncontact synchronized transmissions, considered a revolution in technology.

Andranik Gevondovich  did a lot also for the formation of science and industry in Armenia. Thanks to his participation, such large production associations as Armelektromash, Armkable, Armelektroapparat, Elektrotochpribor and others were created.

He always remembered his native Artsakh (Karabakh). Each time, arriving in Tsmakahogh, he brought with him a whole truck loaded with electrical equipment.He gave his fellow villagers a tractor, built a small hydroelectric power station (the first in Karabakh), built roads, and opened a school.

Andranik Iosifyan died at the age of 87. He is buried at the Troekurovsky cemetery in Moscow.

''Such scholars as comrade A. G. Iosifyan must remain alive and serve their homeland until the end of their days,'' Stalin said about him.