The Police Troops of the Republic of Armenia Have Always Been by the Side of the Armed Forces: Pashinyan 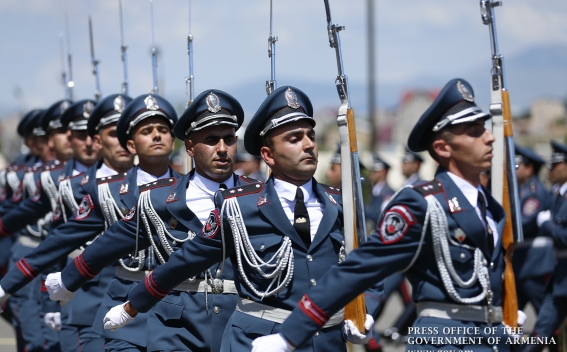 Prime Minister Nikol Pashinyan on Tuesday issued a congratulatory message on the occasion of the 30th anniversary of the formation of the Police Troops of Armenia.

The Police Troops are the same age as our Republic. Formed in the difficult 90's, the Police Troops were baptized in the military sense on the battlefield, at the same time maintaining public order and security of citizens, struggling on daily basis against crime.

The Police Troops of the Republic of Armenia have always been by the side of the Armed Forces, protecting the homeland’s borders together with the servicemen from any encroachment.

An evidence of this was the 44-day war in 2020, when the Troops, together with the army and police units, were crowned with glory.

Unfortunately, on this glorious path, the Police Troops have also suffered valuable and irreversible losses, devotees who sacrificed their lives for the Motherland without hesitation.

Glory to the bright memory of our fallen servicemen!

Deep homage to the parents of the immortal heroes for giving such children to the country.

Today, the Police Troops celebrate the anniversary of their formation with great merit and full right, and I once again congratulate the Command staff and the servicemen, wishishing them new achievements during their service, peace in everyone’s homes.

Trouble-free service to all of you."