The EEU is Entering the Stage of Revealing its Integration Potential for the Benefit of Creating a Common Economic Space and Sustainable Economic Growth: Prime Minister 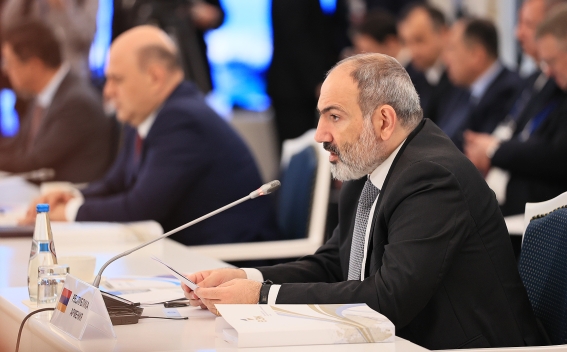 Prime Minister Nikol Pashinyan took part in the expanded-format session of the Eurasian Intergovernmental Council in Minsk. First, the Prime Minister of Belarus Roman Golovchenko met the Heads of Government of the EEU member states, and then the video-shooting ceremony took place.

Prime Minister Pashinyan delivered a speech at the session of the Eurasian Intergovernmental Council, in which, in particular, he noted,

Dear participants of the session,

First of all, let me thank the Belarusian side and personally the Prime Minister of Belarus Roman Golovchenko for organizing the session of the Eurasian Intergovernmental Council and, of course, for the warm reception and the traditional hospitality.

Taking this opportunity, I would like to thank the presiding party, personally the Chairman of the Cabinet of Ministers of the Republic of Kyrgyzstan, Akylbek Japarov, for his efforts to adevelop the issues to be discussed.

I sincerely welcome the representatives of the member and observer states of the Eurasian Economic Union.

The Eurasian Economic Union is gradually completing the stage of accomplishment, and is passing to the stage of revealing its integration potential for the benefit of creating a common economic space, sustainable economic growth of our countries, strengthening competitiveness, effective promotion of its economic interests in the international arena.

Given the new realities, the need to strengthen the close coordination of our actions increases as a basis for the member states to adapt to the modern conditions of the world economy.

In this regard, I believe that the member states of the Union should respond to the risks first of all on a collective basis, using the potential of developing consolidated, mutually acceptable solutions, minimizing the possibility of food shortages.

Dear participants of the meeting,

As the continuation of the discussion of the key issues on our agenda that started yesterday, I would like to dwell on some aspects that are relevant for the Union.

Cooperation within the Union is a priority for our countries, which allows to strengthen the traditional cooperation, to establish new partnerships in order to realize the economic potential of the Union.

In this context, for the purpose of the operation of the Union's common market, I consider the removal of barriers to mutual trade, the formation of new export-import logistics chains, the development of import substitution, and the further improvement of conditions for doing business important.

The experience of the recent years shows that most of the obstacles faced by businesses arise due to the lack of unified, coordinated, consented rules of activity. Only the readiness for constructive dialogue, openness and transparency can help maintain positive dynamics in this issue.

I attach importance to solving the issue of the alcoholic beverages market. The establishment of common goals and principles, common regulatory measures can contribute to the creation of a common market without discriminatory restrictions or exceptions in mutual trade. This is a priority direction for Armenia, which has wide export opportunities.

We are witnessing a digital transformation of the world economy. Without advanced digital tools and technologies, it is difficult to compete in the world arena.

Since the formation of the digital agenda of the Union, a number of large-scale projects have already been launched, due to which the economic relations between our countries have become more simple and more transparent in terms of assessing their effectiveness.

I consider the development of the system for tracking cargo through navigation seals important, mutual recognition of digital signatures, as well as the discussion of cross-border e-commerce, the growth of which poses new challenges for us, requiring effective solution to issues related to product security, consumer protection, as well as ensuring the integrity of taxes and customs revenues.

Given the lack of shared borders with the EEU member states, the digitalization of processes will save time and material resources for Armenia.

Logistics is another field that requires digital solutions. In this context, I would like to emphasize the need for the member states to work out agreed proposals for cooperation on creation and development of transport infrastructure, multi-module logistics centers and Eurasian transport corridors. The Armenian side attaches great importance to the development of dialogue and cooperation with the People's Republic of China in the implementation of the "Belt and Road" strategic initiative.

In the end, I would like to note that despite the objective difficulties that arise on the way to reaching compromises, we continue to move towards building an effective union that will work successfully in today's difficult realities.

Thank you for your productive work and constructive discussion".

The Prime Ministers of the Eurasian Economic Union member states discussed and adopted decisions related to the strengthening of the internal market, the development of transport infrastructure, and the regulation of customs tariffs. Reference was also made to cooperation on digital agenda.

By the decision adopted at the meeting, the Council of the Eurasian Economic Commission was instructed to ensure, together with the governments of the EEU member states, the preparation of indicative balances on wheat, barley, corn, sunflower seeds, sugar and other products.

Tigran Sargsyan, Deputy Chairman of the Board of the Eurasian Development Bank, made a presentation on the forthcoming joint programs and steps in the direction of the digitalization process.

The agreed documents and protocols were signed at the session.

It was decided to hold the next session of the Eurasian Intergovernmental Council in Kyrgyzstan at the end of August.

After the session, the Prime Ministers visited the Victory Square in Minsk, laying wreaths at the monument to the victory in the Great Patriotic War, paying tribute to the memory of all the victims.