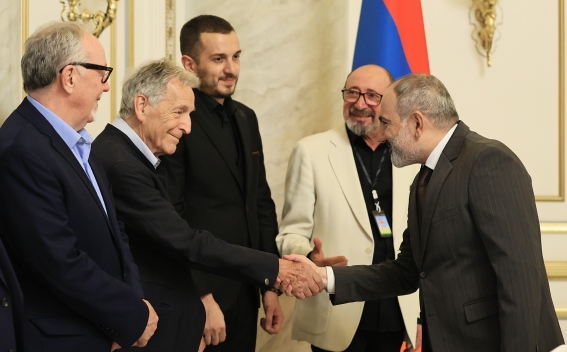 The meeting was also attended by Minister of Education, Science, Culture and Sport of Armenia Vahram Dumanyan and Golden Apricot Artistic Director and CEO Karen Avetisyan.

Prime Minister Pashinyan welcomed the participation of the leading representatives of cinema in this important event in Armenia, which, according to him, contributes to the development of film industry, intensification of professional contacts and exchange of experience. According to the PM, development of film production is important not only for culture, but also for education, science and technologies, adding that Armenia is interested in participating in this process not only at a local but also at an international level.

Harutyun Khachatryan highly appreciated the support of the Armenian government for the film festival and presented details about the course of the event.

The guests expressed gratitude for the invitation to attend the festival and shared their impressions, stating that they enjoy their time in Armenia.

The prospects of developing cinematography in Armenia were discussed at the meeting.

PM Pashinyan presented the government’s reforms in the spheres of culture and education which are aimed at qualitative changes, creating an environment and value system directed to development.