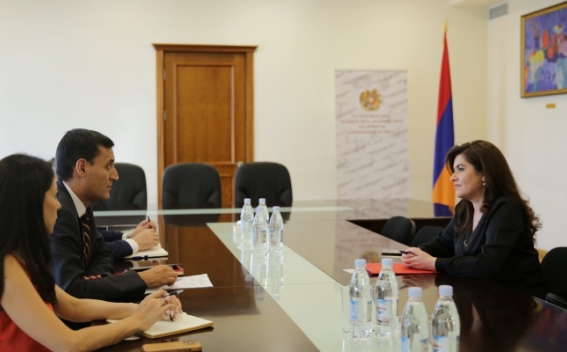 According to Armenpress, congratulating the Ambassador on appointment, the Armenian Deputy Minister wished her a productive work for the benefit of the development of the Armenian-Albanian ties. He expressed confidence that the Ambassador will contribute to further strengthening and deepening the relations between Armenia and Albania.

The Ambassador of Albania thanked for the reception and stated that there are many commonalities between Armenia and Albania, and the close cooperation in educational, cultural and a number of other directions has a very big potential.

Deputy Minister Martirosyan in turn noted that the cooperation with Albania is also special in a sense that being a transitional country it has significant achievements that could be taken into consideration in the context of developing Armenia’s education, cultural, science and other sectors.

The sides discussed the bilateral and multilateral cooperation prospects in education, culture and youth spheres and expressed readiness to encourage the agencies operating in these areas to expand the partnership. As a first step they highlighted the opportunity of inter-university cooperation within Erasmus+, Horizon Europe programs, the cultural mutual visits and the partnership between youth structures.

In response the Ambassador said that the government of Albania is well aware of the current situation and expressed readiness to convey these concerns to the Albanian government.

Artur Martirosyan invited the Ambassador to attend the STARMUS VI festival in Armenia on September 5-10.