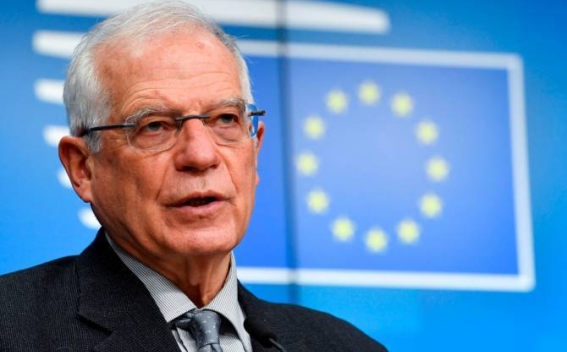 A group of Members of the European Parliament have recently sent a question for written answer to the Vice President of the European Commission/High Representative of the Union for Foreign Affairs and Security Policy Josep Borrell about the deterioration of the situation in Nagorno Karabakh, Armenpress reports.

They wanted particularly to know what concrete steps the European External Action Service intends to take to prevent a renewed outbreak of hostilities in Nagorno Karabakh and to continue the constructive dialogue between the parties.

On behalf of the European Commission, Josep Borrell provided an answer to the MEPs, where he expresses the EU’s deep concerns over the recent incidents between Armenia and Azerbaijan and the possibility of further escalation.

In their letter the MEPs note that while the world’s attention is focused on the developments in Ukraine, the situation in Nagorno Karabakh is deteriorating. "Azerbaijani forces attacked the village of Parukh on March 24, 2022, and violated the ceasefire on May 28, 2022, fatally wounding an Armenian soldier. This happened a day after a crude speech by Azerbaijani President İlham Aliyev, in which he presented the use of force as an approach to enforcing international law, also claimed that the conflict over Nagorno Karabakh had been fully resolved, made claims to Armenian territory, and said in harsh words that the "Nazis in Armenia" [... ] "should keep quiet and not dare to even turn their eyes to Azerbaijan if they do not want their heads to be crushed again", the MEPs said.

They stated that these actions and statements are in open contradiction with the provisions of the November 2020 ceasefire agreement and the spirit of the declaration issued after the trilateral meeting between Armenia, Azerbaijan and the EU in Brussels on May 22, 2022.

In response, Josep Borrell said: "The EU is deeply concerned by the recent incidents between Armenia and Azerbaijan and the possibility of further escalation. The Commission regrets the loss of life.

The EU takes a positive approach to the continuation of the trilateral talks led by the President of the European Council with the Armenian Prime Minister and the Azerbaijani President. These efforts have already produced numerous results, but a peace process is never without difficulties. The EU's goal remains to contribute to a comprehensive agreement for lasting peace and security in the region.

The High Representative/Vice President has been in regular contact with Armenia and Azerbaijan since the outbreak of hostilities. The EU Special Representative for the South Caucasus and the Conflict in Georgia has been involved in the preparation of the trilateral meetings and has followed up on the ground on the implementation of the agreements reached between the leaders of Armenia and Azerbaijan, most recently in early June 2022. On May 31, 2022, the Spokesperson for the President of the European Council issued a statement reiterating the need for a fair and balanced negotiation process and the need to prepare the population for peace. The President of the European Council also addressed both heads of state and government in early July 2022 regarding the recent sharp statements that are not conducive to the nature and spirit of the talks and expressed the EU's readiness to convene the next round of trilateral talks in Brussels".