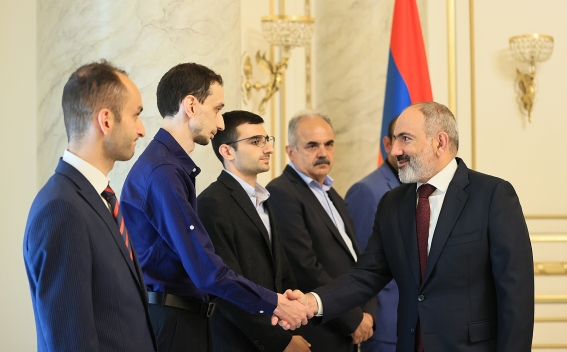 Congratulating the team members on the occasion of winning silver medals at the World Chess Olympiad, the Prime Minister said,

Dear members of the chess team of the Republic of Armenia,

First of all, I want to congratulate all of us and you on the occasion of another great success of the Armenian chess team.

Of course, the Armenian chess team is perhaps the most title-winning team in the history of our country: it has won the gold medal of the Chess Olympiad three times, once the silver medal, and three times the bronze medal, it has been the champion of the World Team Chess Championship, that is, the titles can be listed for a very long time.

I want to personally thank you for the work you have done and emphasize the fact that in the transformation strategy of Armenia until 2050, we have set as a goal that the representative of the Republic of Armenia should win the title of individual world chess champion. We formulated this as a strategic goal for Armenia, and I want you to know that we are also ready to take the necessary measures to achieve it with your support and advice or request.

I think this is really a strategic goal for Armenia, and a lot of work needs to be done to bring it to life. What we have today enables us to take the next step for development, and for that, of course, the Government, I personally, we are all ready to make all efforts. I want to congratulate again. If you noticed, I'm congratulating firt of all us, and not you, but I'm also congratulating you. I want to thank you for the truly magnificent job."

Nikol Pashinyan exchanged thoughts with the representatives of the Armenian chess team about the course of the 44th World Chess Olympiad, their impressions from the tournament, as well as the prospects for the development of this intellectual sport in our country. State support programs, improvement of chess schools in the capital and regions and formation of new infrastructures, encouraging chess players and coaches and other issues were discussed. The Prime Minister reaffirmed the readiness of the Government to promote the development of the sector with its tools and gave instructions to the responsible persons.

Prime Minister Pashinyan handed over the high awards to the representatives of the men's chess team of Armenia and once again praised them for keeping Armenia's reputation high in international tournaments with their chess success.