Ministry of Emergency Situations: There Were About 4 tons of Flammable Substances in Surmalu 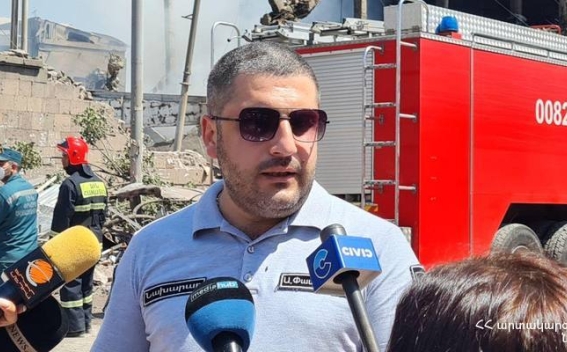 After the explosion at the Surmalu trade center, two citizens are currently missing and 16 are dead, while the identity of one of them has not been established, Armenian Minister of Emergency Situations Armen Pambukhchyan told journalists today, News.am reports.

According to him, three people were previously reported missing, but one of them is alive. I mean a Russian citizen who was operated under completely different circumstances, unrelated to Surmalu, and has already been in touch with her relatives, and it is due to this circumstance instead of three missing at the moment we speak about two.

Pambukhchyan noted that only one of the 16 victims has not yet been identified, and when that is done, we will actually have only one missing person.

"If the identity of one unidentified victim is identified, there will be one citizen left under the rubble whose approximate whereabouts are already known. When that person is located, the work will intensify. After the search and rescue work is over, the issue of dismantling the part of the building that has not collapsed will be discussed," Pambukhchyan noted. The Minister also informed that in the course of the conversation with the owner of the shopping center, they managed to receive all the necessary information about what may be located in the building and based on this information, they carried out works.

When asked if there could still be combustible materials in the basement and storage rooms, the Minister said that 50-60% of the area has already been cleared and if there were such materials, they would have been discovered already. Pambukhchyan also said that as a result of contacts with the owner, it was determined that there were four flammable substances in the building before the explosion, according to preliminary estimates.