Ararat Mirzoyan Had a Meeting with Foreign Minister of Cyprus 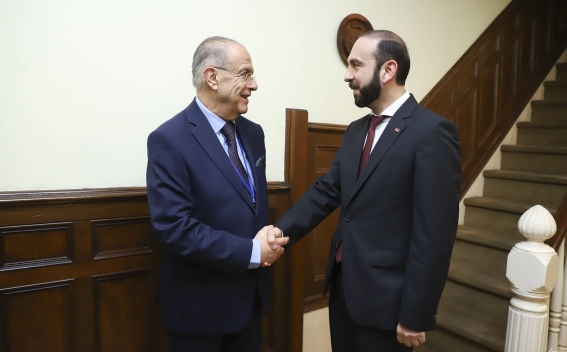 Minister Mirzoyan presented details regarding the consequences of the aggression unleashed by Azerbaijan in the sovereign territory of Armenia since September 13, the targeting of the civilian population and infrastructure by the Azerbaijani armed forces, as well as the gross violations of international and humanitarian law.

Ararat Mirzoyan expressed gratitude to the Cypriot side for showing solidarity to the Armenian people, as well as for the clear and targeted response to the situation. He noted that, in terms of preserving the ceasefire regime and the withdrawal of Azerbaijani troops from the sovereign territory of the Republic of Armenia, as well as the exclusion of a new aggression, the international community's clear and unambiguous condemnation of the aggressor country and the appropriate actions are fundamental.

During the meeting, Ministers of Foreign Affairs of Armenia and Cyprus also discussed a number of issues of the bilateral agenda and exchanged views on further expanding the cooperation within the framework of Armenia-Greece-Cyprus format and enhancing it to a new level.

The interlocutors also exchanged views on regional issues. Minister Mirzoyan briefed  his counterpart on the position of the Armenian side regarding Armenia-Azerbaijan relations and the Nagorno-Karabakh peace process.

During the meeting, the sides touched upon the normalization process of relations between Armenia and Turkey.