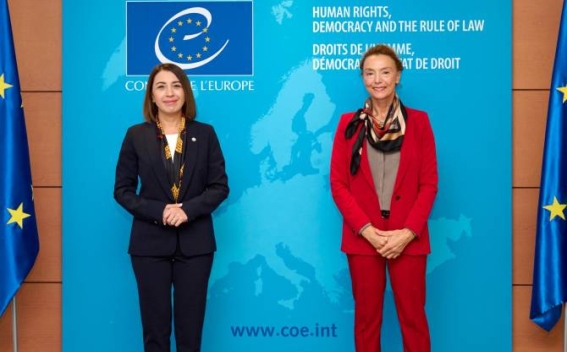 On September 27, 2022, The Human Rights Defender Ms. Kristinne Grigoryan held a meeting with the Secretary General of the Council of Europe Ms. Marija Pejčinović Burić.
During the meeting, the Human Rights Defender presented the recorded information regarding the damages caused to the civilian population and civil infrastructures, the environment, and other acts prohibited by International Humanitarian Law and International Human Rights Law as a result of the Azerbaijani military attack on Armenia that was launched on September 13, 2022. Ms. Grigoryan discussed the crimes committed by Azerbaijani servicemen against Armenian Prisoners of War and the bodies of killed servicemen and referred to the cause of these crimes: the systematic policy of Armenophobia and of ethnic hatred of Armenians conducted by the Azerbaijani state. The mentioned facts are summarized in the Ad hoc report of the Human Rights Defender published on September 16, and which was personally presented to the Secretary General. The Defender presented the priorities of the activities of the Human Rights Defender’s Office, within which she highly appreciated the cooperation with the Council of Europe Office in Yerevan, as well as specialized structures of the Council of Europe, and the Office of the Secretary General.
The Secretary General highly valued the work of the Defender, and thanked her for the effective collaboration and the ad hoc report. The Secretary General mentioned the necessity of the return of Armenian Prisoners of War and civilian captives who are still held in Azerbaijan, and reiterated her commitment to continue efforts in this direction.
The Secretary General referred to the program directions being implemented with Armenia and emphasized the readiness of the Council of Europe to provide continuous support, including within the framework of Armenia-CoE Action Plan.
Ms. Marija Pejčinović Burić underlined her support to the implementation of mandate of the Human Rights Defender, and the sides of the meeting agreed to continue the effective and reliable cooperation.
Հայերեն