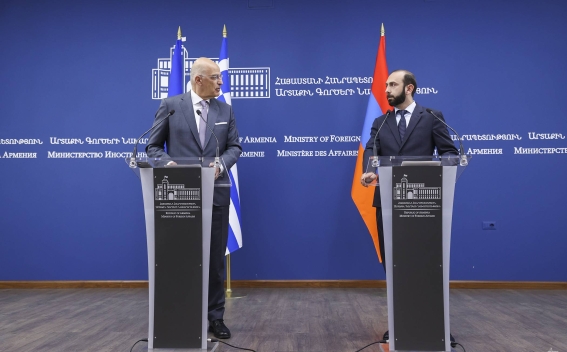 Greece sends a clear message to countries that seek to redraw maps: the revisionist policies will fail, Greek Foreign Minister Nikos Dendias said in a statement to the press after his meeting with Armenian Foreign Minister Ararat Mirzoyan in Yerevan, Armenpress reports.

“Greece has repeatedly underlined that we support the sovereignty and territorial integrity of all states. That also goes for our dear friends, the Armenians, Armenia. We believe in the inviolability of borders, and I am referring to the incidents that happened a few days ago following the shelling of Armenian territory, including inhabited areas by the Azeri military forces. And I would like to quote President Macron who said yesterday ‘I strongly condemn what happened in recent days and call for peace and resumption of negotiations’. So, I am here to express my solidarity with the Armenian Government and the Armenian people. The historic relation between the two countries go back centuries, the substantial Armenian community in Greece, including thousands of Greek citizens of whom some are my personal friends, is a strong connecting bond.

I would like to send a clear message to countries that seek to redraw maps. And my message is that revisionist policies will fail. To mention another revisionist power: Turkey is trying to take advantage of the recent turmoil in order to undermine peace and stability, be in the Caucasus or be it in the Aegean. And we Greeks, witness this Turkish rhetoric, and just yesterday Turkey protested that Greece is sending a few defensive weapons to the Greek island of Lesbos. And this was done when Greece was acting in line with our obligations as these obligations emanate from the Lausanne Treaty. To cut a long story short: Turkey is protesting because Greece does not allow its territories defenseless. Turkey issues a casus belli threat of war against Greece, and has landed a fleet a few miles from the Aegean islands. But we have repeatedly stated that we are ready and willing to engage on constructive dialogue with Turkey on the basis of international law, but also, we stand ready to defend our country and to defend our rights,” FM Dendias said, stressing that Greece will do whatever it takes to defend itself and its rights.

He said that during his meeting with FM Mirzoyan the security challenges in the Caucasus were also discussed.

“I would like to thank you Ararat for the briefing. I look forward to meet Prime Minister Pashinyan and the Defense Minister. Our position on Nagorno Karabakh remains unchanged. We support achieving a peaceful, mutually acceptable solution within the framework of international law. International law is the holy gospel of foreign policy. In this regard we also salute the courage of Prime Minister Pashinyan who proposed a new approach, for a new future in this region, just like President Macron said yesterday. But solutions and peace cannot be built when there is threat of force. That applies to the Caucasus, that applies to the world. And of course I include Eastern Mediterranean. Greece will continue to support the resumption of bilateral negotiations as well as the EU and US contributions to this effort. Also, facilitated by the OSCE Minsk Group, we also stand ready along with other EU partners to help mediate towards possible solution. Because in the end of the day, we cannot change geography. People have to have the opportunity to live peacefully side by side. And we also believe that humanitarian issues have to be resolved immediately and international humanitarian law has to be respected,” FM Dendias said.