Provocation of Azerbaijan is aimed at disrupting the meeting of the Foreign Ministers of the two countries: MFA 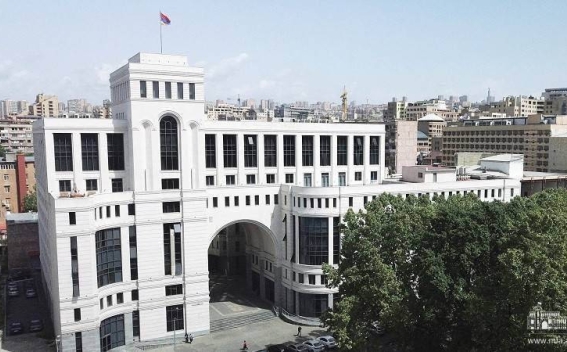 The Armenian Ministry of Foreign Affairs released a statement on the violation of the ceasefire regime by Azerbaijan.

"On September 28, the units of the Azerbaijani armed forces, which unlawfully invaded the sovereign territory of the Republic of Armenia, once again grossly violated the ceasefire regime with the use of mortars and weapons of large calibre, and shelled in the eastern direction of the Armenian-Azerbaijani border, as a result of which the Armenian side suffered three casualties.

The recent provocation carried out by Azerbaijan, in continuation of its large-scale aggression against the territorial integrity of Armenia, launched on September 13, is a clear disrespect towards the calls of the international community and the member states of the UN Security Council to maintain the ceasefire. This is a reaffirmation of the alarms of the Armenian side that Azerbaijan is attempting to continue its policy of use of force and maximalism.

Moreover, such provocation of Azerbaijan is aimed at disrupting the meeting of the Foreign Ministers of the two countries, the arrangement of which is under discussion.

In the current situation, we urge the international community to undertake effective steps and implement relevant mechanisms in order to suppress the military-political leadership of Azerbaijan for the strict observance of the ceasefire regime, the withdrawal of the Azerbaijani armed forces from the sovereign territory of the Republic of Armenia and the prevention of new aggressions.

The Republic of Armenia will continue to protect its sovereignty and territorial integrity by all means prescribed by the UN Charter," the MFA said.