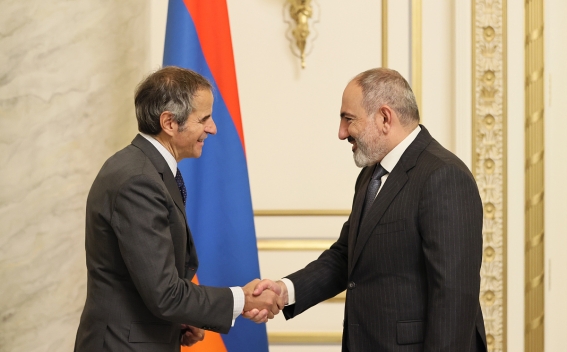 Welcoming the IAEA Director General’s visit to Armenia, PM Pashinyan said that Armenia attaches importance to the cooperation between the government and the IAEA, which, he said, plays a significant role in terms of ensuring the energy and nuclear safety and developing the capacities of Armenia. The Prime Minister said that these issues are among the strategic priorities of the Armenian government.

The IAEA Director General also highlighted the importance of bilateral partnership in the field of ensuring nuclear safety, both around current and further projects and expressed readiness to continue the support to the Armenian government in that direction.

The sides also discussed the works aimed at raising the safety level of the Armenian Nuclear Power Plant, exchanged views on the opportunities of deepening the cooperation between Armenia and IAEA.