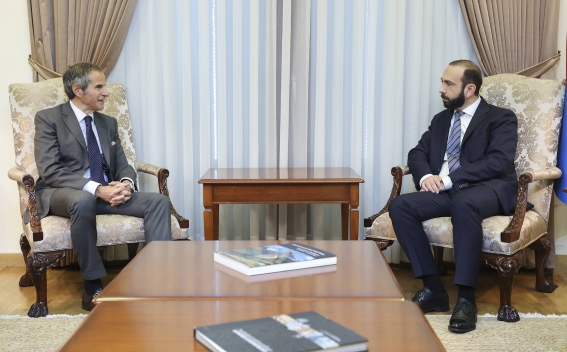 On October 4, Foreign Minister of Armenia Ararat Mirzoyan held a meeting with Rafael Mariano Grossi, the Director General of the International Atomic Energy Agency, who is in Armenia on a working visit.

Rafael Grossi underscored that Armenia is a reliable partner of the IAEA and emphasized Armenia's transparent working approach and consistent addressing of the recommendations of the IAEA missions.

The interlocutors commended the extensive agenda of Armenia-IAEA, which includes both nuclear safety and energy, as well as environment, healthcare, emergency situations and other fields. In this context, the Minister of Foreign Affairs of Armenia stressed the importance of the programs implemented with the financial and professional support of the Agency in the above-mentioned directions.

During the meeting, a number of issues on regional security were also touched upon.