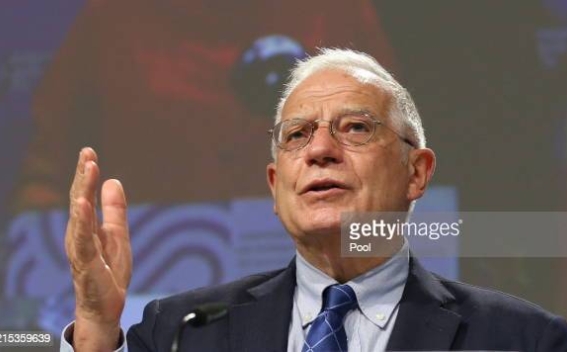 Vice President of the European Commission and High Representative of the EU for Foreign Affairs and Security Policy Josep Borrell has clearly recorded in his October 4 speech at the European Parliament the fact that Azerbaijan attacked sovereign Armenian territory in September and is now occupying parts of it, Armenpress reports.

“Azerbaijan explicitly bombarded Armenia’s territory, they used artillery and unmanned aerial vehicles. We are not speaking about military action that happened in disputed territory, we are speaking about actions that took place in territory of Armenia. Both countries are accusing each other in violating the ceasefire, but the fact is that Azerbaijan bombarded the territory of Armenia,” Borrell said, adding that Azerbaijan’s military is occupying some parts of Armenia’s territory.

He said that EU is working intensely to de-escalate the situation.

Meetings were organized between the high leadership of the two countries and the EU called for resumption of direct contacts, he said. “What else can we do? We can’t do more than we are doing. We only have certain capacities, I’ll be happy if you’d share your ideas on what else we can do,” he told MEPs.

Borrell said that the EU offered to deploy an EU mediation mission at the Armenian-Azerbaijani border. “Armenia agreed to this offer, but Azerbaijan didn’t. What more can we do? We can’t deploy EU troops without the consent from both sides,” Borrell said.

Speaking about Turkey’s active involvement in the regional processes, he said: “It is clear that Turkey continues supporting Azerbaijan.”

Borrell welcomed Turkey’s readiness to start working toward normalization with Armenia, adding: “It is important that borders between Armenia and Turkey get opened because it will help to de-escalate the situation.”

He called for an investigation into the video showing the gruesome execution of Armenian PoWs by Azeri troops.

Speaking about the EU’s gas supply deal signed earlier with Azerbaijan, Borrell said that the “energy deal will not work to the detriment of human rights.”