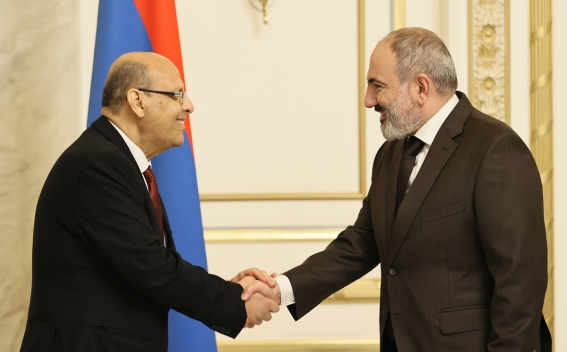 Prime Minister Nikol Pashinyan received the Ambassador Extraordinary and Plenipotentiary of the Arab Republic of Egypt to the Republic of Armenia, Bahaa El Din Bahgat Dessouki, who is completing his diplomatic mission in our country.

The Prime Minister assessed the diplomatic activity of Mr. Dessouki in Armenia and the work done in the direction of the development of Armenian-Egyptian relations as effective, which contributed to the positive dynamics in bilateral relations. Nikol Pashinyan noted that Armenia values continuous dialogue with Egypt and is interested in deepening it.

Expressing gratitude for the appreciation, the Ambassador of Egypt to Armenia said that during his tenure, he invested maximum efforts for the development of relations between the two countries. He noted the high level of cooperation in the political and cultural spheres and emphasized the readiness of the Egyptian side to bring economic ties to that milestone as well, given that Armenia has good investment opportunities.

The sides exchanged thoughts on the perspectives of cooperation in the fields of tourism, construction, technology.

The Prime Minister wished success to the Egyptian Ambassador in his future activities and expressed hope that with his experience and knowledge, Mr. Dessouki will continue to contribute to the strengthening of Armenian-Egyptian relations.