We are ready for neighborhood with Azerbaijan: President of Artsakh 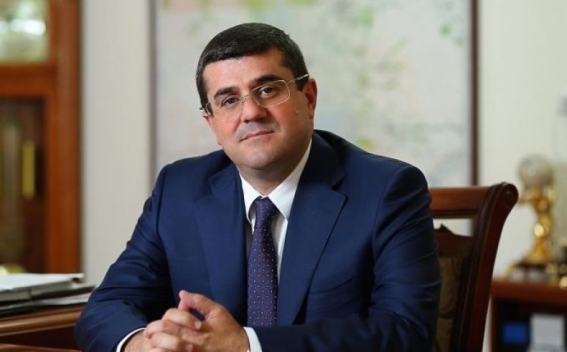 "First, I would like to address the humanitarian issues, in this regard, our main task is to create the necessary conditions for living and working for 40,000 displaced Artsakh residents. Unfortunately, because of Azerbaijan, we have many challenges, we are facing many problems, Azerbaijan is trying by all means to stand on our way with its provocative actions, constant shootings against the civilian population, and recently we have had some problems with traffic through the Lachin Corridor, by the way, it is our only connection with the outside world," says Arayik Harutyunyan.

He emphasizes that he is grateful to France for the 4 pro-Armenian resolutions adopted since 2020 and condemning Azerbaijan, then adds that Artsakh "expects more than moral support".

"From this point of view, this is my first visit to Europe, I decided to start from France, because the French political field and public opinion are very active and united regarding the Artsakh issue. We hope that France will not be limited to this, and that support will be exemplary for other states. They will also be involved in the effective settlement of our problem, which France is paving the way for," he says.

Harutyunyan emphasizes that the Armenian people are facing the danger of a new genocide, because "leaving Artsakh alone means leaving Artsakh's population to physical destruction."

Harutyunyan emphasizes that the Armenian people are facing the danger of a new genocide, because "leaving Artsakh alone means leaving Artsakh's population to physical destruction."

Harutyunyan answered the journalist's question whether Armenia will be in danger if Artsakh does not exist. "Undoubtedly, Azerbaijan and Turkey do not hide their plans regarding Syunik and claim the entire territory of Armenia under the pretext of the Zangezur Corridor. We realize that today it is not only about Artsakh, but the entire Republic of Armenia is at risk, the entire Armenian people, and the September developments, when the Azerbaijani troops invaded the territory of the Republic of Armenia, are a clear proof of this."

Harutyunyan declares that Artsakh cannot have any future other than being Armenian.

"We are ready to establish a neighborhood with Azerbaijan, to have normal relations, but the issue of independent status cannot be a subject of negotiations or discussion," he says.

To the journalist's clarifying question whether the option of merging with Armenia is not being discussed, the President of Artsakh says that the dream of every Artsakh citizen is the unification of two Armenian states, but they understand that from the point of view of international law, it is still not realistic.

"We are not in favor of war, we are in favor of peace, we just want our rights to be recognized and, finally, peace to be established in our region," he emphasizes.