In January-September, the trade turnover between Armenia and EAEU countries increased by 80% compared to the same period of 2021: Pashinyan 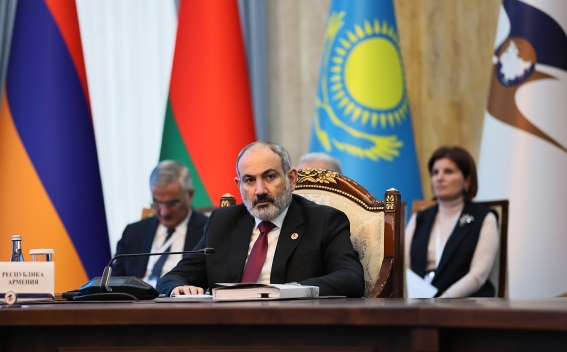 The leaders of the EAEU countries were welcomed by the President of Kyrgyzstan at the Ala-Archa State Residence in Bishkek, after which the Heads of State posed for a family photo.

Prime Minister Pashinyan made a speech, in which he particularly said:

I am glad to welcome you at the final session of the Supreme Eurasian Economic Council.

Let me express my gratitude to the presiding party and personally to the President of the Republic of Kyrgyzstan, Sadyr Japarov, for the traditional hospitality and the organization of today's meeting, as well as for the implementation of the priority areas, goals and tasks outlined during the presidency of Kyrgyzstan.

I also sincerely welcome the Prime Minister of the Republic of Uzbekistan, Abdullah Aripov, and would like to express the readiness of the Republic of Armenia to develop cooperation by implementing joint projects with observer countries.

Before addressing the key issues on the agenda of the meeting, I should mention that the economic development of EAEU countries has been going on in difficult conditions in recent years.

The current situation, of course, affects the main economic indicators of all member states of the Union, and at this difficult moment we all should focus our efforts on maximizing the impact of the Eurasian integration, taking into account the national priorities of socio-economic development.

Despite the created situation, I would like to note with satisfaction that there is a growing tendency in mutual trade. The trade turnover between Armenia and EAEU countries in January-September of this year amounted to more than 3 billion USD, which is an increase of about 80 percent compared to the same period of 2021.

In continuation of our discussions in the narrow-format session on key issues on the agenda, I would like to raise a number of issues that are relevant for the economic union.

Industrial cooperation is an important element of economic integration in the Eurasian region, and we must focus our efforts to promote all promising initiatives. In this context, today we are launching a new mechanism of financial support for industrial cooperative. I am sure that this financing tool will contribute to the technological development of our countries.

Together with the Commission, we have started to implement the road map within the framework of the climate agenda. The topic of "green" technologies and environmental protection is especially relevant for Armenia. By developing "green" energy, Armenia actively adopts renewable energy sources. Measures are being taken in the direction of decarbonization of the metallurgy. We encourage the use of electric transport in every possible way.

I would like to draw your attention to food security issues. From this point of view, in the current year, in order to ensure the stability of the internal markets of EAEU member countries, indicative balances of important agricultural products were drawn up. This is an effective tool for quickly determining the needs and opportunities for mutual supplies within the Union.

I should also mention the work of the Commission in the direction of forming an investment portfolio of agro-industrial projects, which can become an effective tool for the development of cooperation and import substitution.

For successful implementation of the Eurasian agenda, it is extremely important to find mutually acceptable solutions on all issues.

In this regard, the Armenian side attaches priority to the consistent implementation of agreements aimed at creating common markets of energy resources. In particular, the formation of the common gas market remains a sensitive issue for us.

Thanks to the constructive dialogue and pursuing the path of finding compromise solutions, it was possible to ensure a high level of readiness of the draft of the international agreement on the formation of the common gas market.

However, taking into account the complexity of the process, due to the need to take into account the different opportunities and interests of countries in the energy sector, a number of unresolved issues remain.

We are ready to take a flexible approach to reach consensus and ensure balance in the interests of all EAEU member states on unresolved issues in order to fully utilize the advantages and potential of the Union's common gas market.

I would like to mention that by the results of the current year, the Commission, together with the governments of the member states, has demonstrated high-level work in the direction of balancing the internal market of the Union, ensuring the proper coordination of national and supranational interests in this difficult period.

In turn, the digital transformation of the priority areas of supranational regulation with the proper level of information security will create a foundation of trust between the member states of the Union.

Continuing the transition of the integrated information system to the digital platform, we will be able to create the necessary conditions for forming a solid infrastructure that ensures the free movement of goods, services, capital and labor.

I consider the development of trade and economic relations between EAEU and third countries and unions to be another important direction of our cooperation.

This, in turn, will lead to an increase in the volume of exports of EAEU products, the diversification of foreign markets, the attraction of investments and the creation of a favorable environment for international economic cooperation with third countries.

In the context of successfully integrating into the global economic architecture and establishing mutually beneficial relations with third countries, we attach great importance to the main directions of EAEU international activity for the year of 2023. This document is a kind of "foreign economic strategy" and talks about the broad areas of cooperation for the next year.

Dear participants of the meeting,

Undoubtedly, it can be stated that our joint efforts bring practical results, and we feel the positive effect of integration, which becomes possible thanks to the well-coordinated interaction of the member states of the Union. The passing year was a jubilee year for the Eurasian Economic Commission. During these ten years, it certainly became the initiator of a number of important decisions for the member states of the Union. In this regard, let me thank all the members of the Commission, led by Mikhail Myasnikovich, for their worthy contribution to the development of the Eurasian Economic Union.

In conclusion, I would like to thank everyone once again for their active cooperation in 2022 and wish success to the Russian side that has assumed the presidency of the Union bodies.

Taking the opportunity, let me once again confirm the commitment of the Armenian side to the principles and goals established on the basis of the EAEU Treaty and the readiness for active cooperation with all member states for the benefit of further promotion of the Eurasian integration.

During the meeting, topical issues of the activities of the Eurasian Economic Union were discussed, ways were outlined for further deepening integration processes, improving the functioning of the common market for goods and services. A number of decisions related to the energy and trade sectors were discussed and adopted. A decision was made to start negotiations with the United Arab Emirates on a free trade agreement.

The Russian side presented the main priorities of its upcoming presidency of the EAEU in 2023.