New Spirit in the Leisure Life of Artsakh 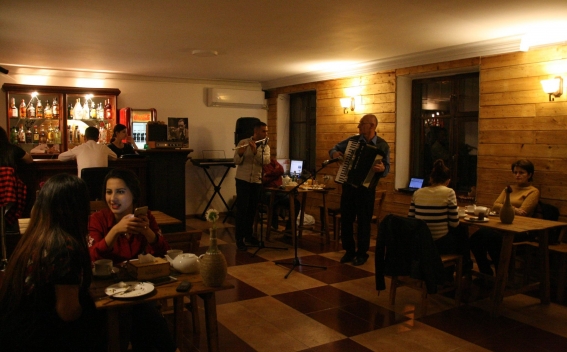 Those, who once a year visit Nagorno-Karabakh Republic (Artsakh), cannot but notice that year by year life of  people there becomes more interesting in the presence of the growing number of  cultural, education and other  events organized there. The developing culture of pubs, to be more correct vine houses, also contributes to that.

In the capital of the Armenian second republic, Stepanakert, an example of pub or again to be more correct wine house is "Muklimandil" (in the Artsakh dialect "muklimandil" is meant cobweb) which has already become one of the favorite places of Artsakh people. If you have an opportunity to visit there in the evening you will find a lot of people who around a cup of coffee or wine lively discuss various topics.

Talking to "Armedia" IAA  one of the co-owners of "Muklimandil," Naira Israyelyan referring to the idea of having such a place in Artsakh, particularly noted:

"We wanted to have a web, which would connect Artsakh to the world. As we are situated in Artsakh instead of "web" we have "muklimandil. In the sphere of marketing the name was a real success. When hearing the name for the first time, people smiled and it was one of our goals. There is no luxury in "Muklimandil," everything is simple and ordinary, the design is completely hand made. We have founded a place, where people feel free and  at ease. Any interesting idea of our customers can have its place in the list of our events. The place, which will promote active life of young people and will motivate them. "

Another newly opened, interesting place in Stepanakert is "Art Café Remark." Talking to "Armedia" IAA  a representative of the café noted:

"We have tried to found a unique place in Stepanakert with free and interesting atmosphere and I think we have succeeded in that.  The idea came long ago but it was not completely mature yet. Inspired by the book of Remark "Arc de Triumph," we have decided to choose the name "Remark. The café is different from other places by its interior, services, atmosphere (the very warm atmosphere is ensured by vinyl player)."

To understand what the attitude of Artsakh people is towards this culture, we spoke to some of them. For example, Siranush Sargsyan noted:

"Especially in the recent years some tendencies are noted. It interesting those attempts have become even active after April war. As an example we can state "Muklimandil," ''Art cafe Remark'' which was opened several days ago. Outside Stepanakert there is an interesting place in Askeran. "Mer Tagh" ( from Armenian translated as "Our District") which was opened by a newly formed family, who moved to motherland after the war."

In her turn Irina Safaryan also noted that during the recent years this culture began to develop in Artsakh and as she noted "an ice began to melt."

"I think that Artsakh people still start to form an attitude about pubs. During the recent two years, naturally, we can say that there has been progress, the ice began to melt and step by step pub culture started to penetrate our daily life," she noted.

The co-owner of "Muklimandil," Naira Israyelyan, made the following interesting remark about the changing attitude of Artsakh people towards pub culture.

"The society at first was very surprised at the name, that there were no separate rooms and the tables were placed very close to each other (it was done deliberately by us to make people communicate and make the atmosphere friendly and warm.)"