From Elections to the Referendum Excluding Same-Sex Marriage: Georgia's Domestic Politics in 2016 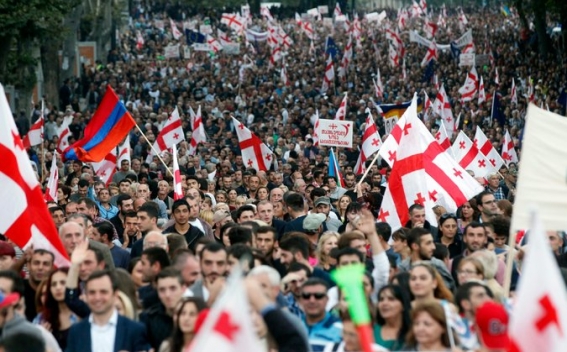 2016 was a difficult year for Georgia, mostly because of the electoral process and its consequences, and some economic problems that country experienced at the beginning of the year.

Thus, as in 2015, the Georgian national currency (lari) devaluation continued also in 2016. During the year lari managed to record two historical rate declines. This, naturally, could not but influence the prices of various products as well as the sentiments of the public.

In the first half of 2016 there was satisfactory progress in the relationship of country's President Giorgi Margvelashvili with the Prime Minister Giorgi Kviriashvili, who replaced Irakli Gharibashvili. Unlike his predecessor, Kvirikashvili was present at the president's speeches in Parliament, which was quite welcomed in the political circles. But already in the second half of the year, the president’s position on various bills again became a source of tension between the country's two chief officials.

During the year the change of election legislation and the referendum on the Constitution in connection with the definition of marriage became the focus of attention of various political parties. The main change of the election legislation was probably the relative enlargement of constituencies, which caused some complaints, in particular, among Armenians from Javakhk region. Another important change was the provision to 100% proportional electoral system, which, despite the opposition's demand, was not extended to the parliamentary elections of October.

The attention of the public and political circles was also focused on the legislative initiative by "Georgian Dream" on holding a referendum concerning marriage definition which aimed at excluding the possibility of same-sex marriages. The initiative to hold a referendum, however, was blocked by the President, after Prime Minister Kvirikashvili declared that the referendum issue will be considered after the parliamentary elections.

The major event of 2016 in Georgia's domestic politics was the parliamentary elections.The campaign that started in June was very active, and was full of political rearrangements. It is noteworthy that some political forces came out of the "Georgian Dream" coalition and the party announced that unlike previous elections, this time it would not go for wide alliances. The former president Mikhail Saakashvili’s "United National Movement" Party was acting as the main opposition force. In addition, an active electoral battle was waging the "Republican" party of former parliament speaker Davit Usupashvili, former Defense Minister Irakli Alasania's "Free Democrats" party, "Nino Burjanadze - Democratic Movement" union, Irma Inashvilii’s "Patriots' Alliance " and other forces.

In October, the parliamentary seats were distributed in the following way, "Georgian Dream" - 115 seats, "United National Movement" - 27 mandates, "Patriots' Alliance" - 6 seats. It is noteworthy that the "Georgian Dream" has a constitutional majority in the Parliament, for which 113 seats were necessary.

This gaves the "Georgian Dream" party large opportunities not only to initiate constitutional changes (for which there has already been established a Constitutional Commission), but also freely develop both domestic and foreign policy.

Summing up 2016 in Georgia's political life, we can say that although the Georgian opposition was successful in manipulating with various problems in the country and prompted a vigorous election campaign, the ruling "Georgian Dream" party managed to maintain power even further strengthening its position in the parliament. This means that over the next 4 years, Georgia's political course is unlikely to witness significant changes, although we cannot rule out the possibility of some "risky" initiatives both in domestic and foreign policy.