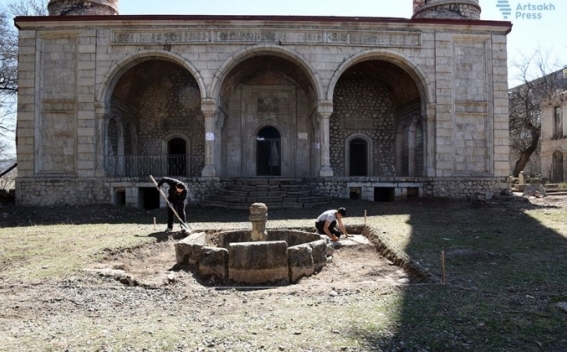 During the excavation-clearing works implemented in the Iranian Upper Mosque in Shushi town, Artsakh, Islamic cemetery tombstones have been discovered, which mostly date back to 1905-06, Artsakhpress reports.

Njdeh Yeranyan, deputy director of the State Service of Historic Environment Protection SNCO and the head of the archaeological expedition on the occasion noted.

"The Upper Mosque of Shushi was built in 1883. During Soviet years in 1970 restoration works were carried out, as a result of which mainly the mosque courtyard and the surrounding area have undergone changes. Excavation works have been underway since March 21 and lasted for 20 days. Excavations have been carried out in three parts:  in eastern and western  graveyards of the mosque, near the pool and in the madrasah  ( Arabic: “school”) English madrassa, (Islamic educational institution, which performs the role of a high school and a theological seminary )."

He added that during excavations and pool pipes of different period, as well as  brick structure have been discovered.

According to Yeranyan noted that preliminary studies show that it may be a reservoir.