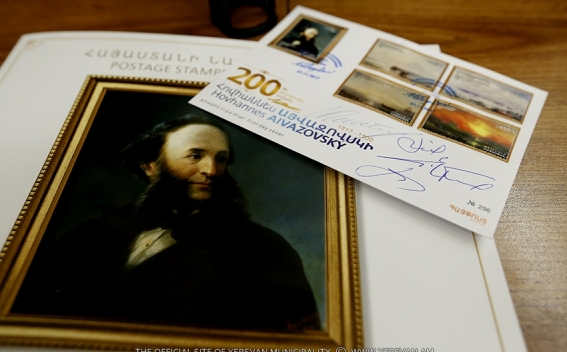 In 2017 on November 7th, a souvenir sheet with five stamps dedicated to the theme "World famous Armenians. 200th anniversary of Hovhannes Aivazovsky" has been cancelled and put into circulation by "HayPost" CJSC in the premises of Yerevan History Museum within the frameworks of the philatelic exhibition dedicated to the 200th anniversary of Hovhannes Aivazovsky, official page of Haypost reports.

The postage stamps of the souvenir sheet with the nominal values of 170, 220, 230, 380 and 450 AMD depict five paintings of the world famous painter of the Armenian origin Hovhannes Aivazovsky. The postage stamps are depicted against the background of three-dimensional exhibition hall.

The souvenir sheet with five stamps was cancelled by the RA Minister of Culture Armen Amiryan, the RA Deputy Minister of Transport, Communication and Information Technologies Arman Khachatryan, Mayor of Yerevan Taron Margaryan, the Managing Director of "HayPost Trust Management" B.V. Juan Pablo Gechidjian, President of the Union of Philatelists of the RA Hovik Musayelyan.