During the Elections, the Azerbaijani Authorities Set Three Main Goals for Themselves: Narek Minasyan 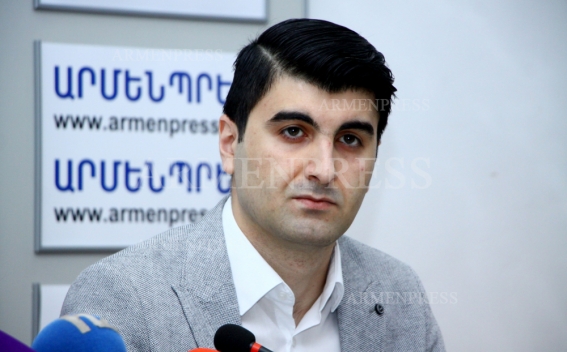 The election of Aliyev and the electoral processes in Azerbaijan in general are only performances, staged mostly for the international community. Narek Minasyan, the head of "Insight" Analytical Center for Applied Policy and Research stated at a press conference in "Armenpress" press center. According to him, the purpose of the Azerbaijani authorities is to create an imitation of legitimacy, to show as if democratic processes are taking place.

According to Minasyan, in the electoral processes the Azerbaijani authorities have set three main problems for themselves. "First, it was necessary to show that the elections were competitive. For this purpose, there were a number of prominent candidates who were carrying out propaganda for Aliyev. Moreover, one of them even confessed that he voted for Aliyev," Minasyan said.

The second problem, according to the expert, was to ensure high participation of citizens in the elections. Taking into account the fact that a number of opposition forces boycotted the elections in general, it was more important for Aliyev's clan to have high level of participation.

The third issue, according to Minasyan, was the involvement of observer missions with which the Aerbaijani authorities tried to present the elections as democratic. "It is noteworthy that by moving the election date, Aliyev deprived the observer missions of the opportunity to conduct long-term observation," the political scientist mentioned.

According to him, Ilham Aliyev had clearly calculated that if the election period was changed from October to April, in the context of the full international agenda and the current tension in the West-Russia relations, the presidential elections in Azerbaijan would be out of the international community's attention. It seems that these calculations justified themselves, and indeed, there is no serious international response to Aliyev's snap elections.

Minasyan said that the leaders of different countries have already congratulated Aliyev and, naturally, among them was the Turkish President. He was followed by the Presidents of Belarus, Iran, Georgia, Russia, etc.