Nikol Pashinyan: "We Must Hold Elections in Line with Best International Standards" 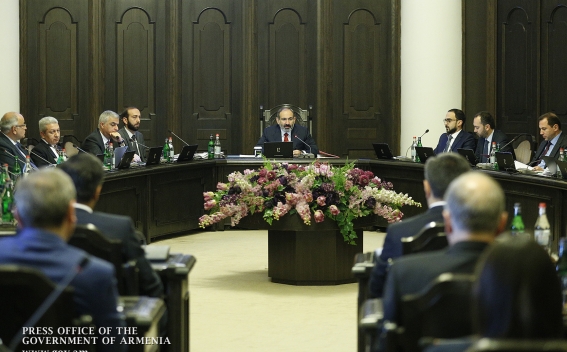 “The pre-election stage is in full swing; the deadline for applications for participation in snap parliamentary elections is over, and our government has assumed political responsibility to hold elections. We have set a task to hold the best ever elections in the history of the Third Republic. I think the bar should be raised: we should say highest international standards-compliant elections rather than the best election in the Third Republic’s history.

In this regard, as I stated in the National Assembly yesterday, we need to emphasize that the use of administrative resource should be ruled out in these elections. In particular, I mean a number of traditions inherited from the past, when general schools were involved in political processes. We need to eradicate the phenomenon when administrative levers are used to direct voters in one direction or another. There used to be such people who told us who we should vote for. This phenomenon should be ruled out, and the voter’s decisions should be formed as a result of propaganda and political content,” Nikol Pashinyan said.

The Acting Prime Minister emphasized that the official results of elections should be formed exclusively according to the ballot. “We should exclude even a ballot paper, as it is commonly said to be put in a wrong rack, and not only in the inter-party, but also in the intra-party format. What do I mean? Since the rating system is still operational, votes are distributed not only between parties, but also between different candidates within the same party. Of course, we have to convey a very clear and strict message: anybody making such an attempt will be strictly punished,” the Acting Premier said.

The next problem, according to Nikol Pashinyan, is the direct or indirect practice of vote bribing. “I hope our law-enforcement bodies - particularly the Police and the Special Investigative Service - are prepared to not only adequately respond to the situation, but also to prevent this phenomenon through prophylactic work. During the election campaign, we will provide for a truly free competition between political parties, there should be no restrictions on access to respective audiences: all political forces should have equal opportunities to communicate with voters,” Nikol Pashinyan said.

The Government decided to authorize the Yerevan Mayor to sign a new agreement on behalf of the Republic of Armenia with EMC CJSC concerning the rights, obligations and responsibilities of the State and the contracting side during the property alienation process in the area enclosed by in Arami, Buzand and Y. Koghbatsi streets.

Highlighting the program’s importance, Nikol Pashinyan noted: “We must work to that effect. There are also 8 units of architectural monuments in the given area. Our policy is that they should not be damaged in any way, let alone the scenario of demolishing them at all. We are working with the investor to amend the project so that the monuments could remain intact during project implementation.”

The fourth program under the Government’s Open Government Partnership Action Plan has been approved. It has been developed on the basis of proposals made by government agencies and civil society. The 4th program consists of 11 commitments, covering such areas as transparency of budget funds, establishment of an actual owners’ registry based on best international standards, transparency and accountability for educational, health, water and land data, etc.

Concerning three bills submitted by NA deputies in the form of a legislative initiative on making additions and amendments to the Tax Code of the Republic of Armenia, Acting Prime Minister Nikol Pashinyan noted that all these issues can be discussed in the context of the Tax Code Reform. “It turns out that due to political processes, our Tax Code-related plans may be reconsidered in terms of timetable,” he said, adding that the Tax Code will have to be adopted by this January.

According to Nikol Pashinyan, the electoral campaign is another good opportunity to hold public debates on the Tax Code Reform.