Pashinyan: We Hope Political Decision on Visa Liberalization with EU will be Taken 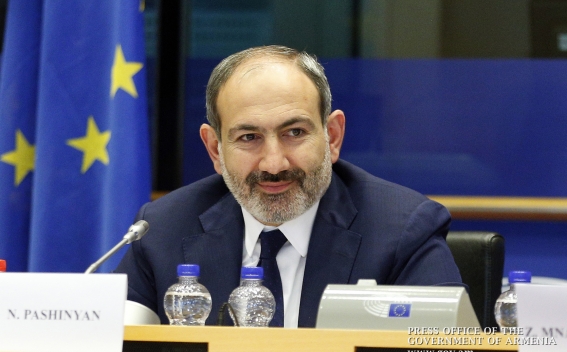 Many issues, from democratic transformation in Armenia to regional and international developments were discussed by the EU Council President Donald Tusk and Armenian PM Nikol Pashinyan during their meeting in Brussels, Pashinyan said in a statement for media, News.am reports.

“During the meeting, we were glad to highlight existing high level of political dialogue and cooperation between EU and Armenia,” Pashinyan said.

He stressed Armenia’s determination to enhance partnership with Brussels, and added that the parliamentary elections were also touched upon during the meeting.

“We appreciate assistance of the European Union for the successful organization of electoral processes. Political changes as well as democratic election brought EU and Armenia even closer in terms of shared values,” Pashinyan emphasized.

He appreciated technical and financial support of the EU to the Armenian government’s reform agenda, which envisages fight against corruption, protection of human rights and consolidation of the rule of law.

“We touched upon CEPA which is an important instrument for enhancing bilateral relations. We agreed that early ratification of the agreement is essential,” Armenian PM added.

In addition, visa liberalization process was touched upon, Pashinyan said, adding that the citizens of Armenia are looking forward to freely traveling to the EU in the near future.

“We hope the political decision will be taken shortly,” he said.

As to the regional changeless, Pashinyan said Armenia appreciates EU’s continued balanced position on Karabakh, and its support for the OSCE Minsk Group efforts.

“Armenia is committed to exclusively peaceful solution,” he added.