Netanyahu: I Will Name a Golan Town After Trump 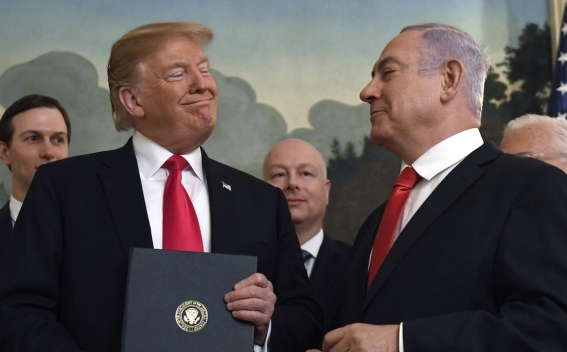 theintercept
Israeli Prime Minister announced on Tuesday he plans to name a settlement in the occupied Golan Heights after Donald Trump, to thank the US president for "recognising Israel's sovereignty over the Golan Heights".

The Israeli premier did not make clear whether the settlement would be directly named after Donald Trump or would take a moniker, such as "Trump Towers", Alaraby reports.

"All Israelis were deeply moved when President Trump made his historic decision to recognise Israel's sovereignty over the Golan Heights," Netanyahu said in a statement filmed somewhere in the Golan Heights, which the Israeli premier toured with his family on Tuesday, and published by Israel's Government Press Office (GPO).

"Therefore, over the Passover holiday, I intend to bring to the government a resolution calling for a new community on the Golan Heights named after President Donald Trump."