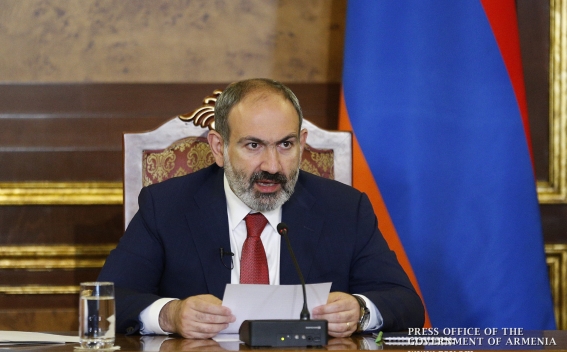 On Monday Nikol Pashniyan came up with a statement on the RA judiciary system:

I have invited you to discuss, in my opinion, an urgent problem which calls for immediate solutions. Notorious political changes took place in Armenia over the past one year, resulting in a nationwide legitimate government, which represents the executive power, and a legitimate national assembly as the representative of legislative power.

However, last year’s developments demonstrated that we had never had a judiciary enjoying the trust of the people in the Republic of Armenia. The judiciary’s activities are still fostering major upheavals in our society.

I cannot and I do not want to comment on the legitimacy and validity of courts’ rulings. Making such judgments is not in my power, although it is impossible to measure and assess with the same standard all court decisions made in Armenia.

Regardless of what seems to be obvious, the judiciary’s decisions are unacceptable to the public: I am stating this not just as a prime minister, but also as a representative of the Armenian people who has the political right to speak on behalf of the people, that is on behalf of the highest power in Armenia.

People in Armenia know that they have formed a legislative power based on their own free will, and a government - executive power - following the latest parliamentary elections that were acknowledged to be free, fair, transparent and democratic by the international community.

But the Armenian people perceive the judiciary as a remnant of the former corrupt system where conspiracy is constantly being designed and implemented against the people. To what extent this presumption is realistic and justified, is a completely different matter.

But the fact that the judicial power does not enjoy the people’s trust means that it is not sufficiently legitimate, which today is an outright threat to our country’s normal life, stability and national security.

From the very first day of my election as Prime Minister, I abided by the principle of non-interference with the proceedings of the judiciary, and I have been committed to this sacred duty ever since. On the other hand, unfortunately, I cannot guarantee that the judicial system will not be exposed to shady and illegal influences, primarily by the former corrupt system because these two systems are bound by human, political and other ties.

Let me only cite one example: how confident can we be that today’s judicial system is able to conduct an objective investigation into the March 1 case, where numerous illegalities were committed by the former executive authorities mediating the judicial system? It is evidenced by the European Court of Human Rights rulings, which affect the residents of the so-called “zones under development” and other issues. This situation has a direct impact on our struggle against corruption.

We have stated at the highest political level that the fight against corruption is a priority for us, but the lack of public confidence in the judiciary is affecting adversely the efficiency of investigative bodies just because the latter often work on the assumption that the judicial system can undermine their revelations due to the organic connection with that same corrupt system.

Of course, these problems are not new. And I understood them from the first day of being elected Prime Minister. Nevertheless, relying on the values of the non-violent popular velvet revolution that came a year ago, I considered that everybody should have the opportunity to participate in the construction of New Armenia and earn the people’s favor through political or legal repentance.

I also hoped that realizing that their previous judicial activity and value system were inconsistent with New Armenia’s aspirations many judges would abandon the status of a judge. However, it did not happen, and I consider that the current judicial system has missed the opportunity to win the people’s trust.

We cannot tolerate this situation any longer because, as I said, this is a threat to stability, normal public life and national security. This is also an issue of economic development, because the unreliable judicial system is simply an impediment to improving the country’s investment climate.

And therefore, dear colleagues, the time has come to carry out a surgical intervention in the judicial system. This process should go as follows:

All judges in Armenia should be subjected to vetting. In other words, the public should have complete information about their political connections and genealogy, property status, as well as about their personal and professional qualities manifested during the previous period.

Now the introduction of transitional justice mechanisms is a vital necessity for the Republic of Armenia, and we need to summarize within a couple of months the work done in this area for the past seven or eight months.

There should be a legislative work in the National Assembly to implement this vital agenda for our country and to have a truly guaranteed independent judicial system in Armenia. Should there arise the need for constitutional amendments, we will resort thereto, we will take that step by holding a popular referendum, if necessary.

All this work should be done within the framework of cooperation with international reputable organizations in this field, international best practices and international commitments undertaken by Armenia.

We have been discussing a relevant agenda for a long time with the UN, the Council of Europe, the European Union, the OSCE, the International Monetary Fund, and the World Bank, and I hope all our international partners will stand by Armenia since we do not want to have a another puppet judicial system, but rather a truly independent, truly objective judiciary, based on the rule of law, which is in line with the priorities of the civilized world. In this regard, we should cooperate widely with the Armenian civil society, non-governmental organizations, and expert community. I want to emphasize that the time has come for realistic, reliable and institutional solutions to the fight against corruption.

Having a truly independent and impartial judicial system is a vital necessity for us, and the lack of such a system is the number one threat to our country. That is why I considered it necessary to refer to it, because my legal and political status compels me to do everything to ensure that the best expectations of the people may come true as seamlessly as possible and without any shocks.

Taking the opportunity, I would like to refer to another topic that has to do with the above. Obviously, there are specific forces representing the former corrupt system who are attempting to implement the well-known scheme of sowing disagreement, contradictions and even incite enmity between the people of Artsakh and the people of Armenia in line with the “divide and rule” logic and in an effort to conceal the previously committed corruption crimes.

While it appears that our compatriots in Artsakh often suffered more from systemic corruption, some representatives of these systems are using their corrupt connections to carry out false propaganda against the Armenian government and the Prime Minister in Artsakh.

As early as during the latest parliamentary election campaign I stated that by analyzing all of this I could see a long-term objective to provoke a conspiracy war, even hand over some territories and put the responsibility of what happened on the Government of Armenia.

In this regard, I consider it as an activity equivalent to state treason, and as Prime Minister of the Republic of Armenia, as the guarantor of Artsakh’s security, the Supreme Commander-in-Chief of the Armed Forces, I will take drastic measures to expose and root out such intentions.

By the way, I think the time has come to set up an investigative commission in the National Assembly to probe into the circumstances that led to the April War in 2016 and to get the answers to a number of questions that are of concern to us all.

Summing up the Artsakh-Armenia topic, I wish to call on our people in Artsakh to unequivocally disavow all those forces whose activity is aimed at sowing discord between the two parts of our nation. I urge the people of Artsakh to support only the forces that stand for the Armenian nation and its legitimate government. All other forces have one and only goal, namely to use the people of Artsakh as medium for serving their narrow group interests, avoid responsibility for the crimes committed in the past, provoke conspiracies against the sovereignty of Armenia and Artsakh.

The revolution of love and solidarity has done away with the corrupt system and cannot put up with any other outcome than the complete and unconditional capitulation of said corrupt system. As regards the judiciary, I wish to state that there cannot be such a judicial system the power of which does not stem from the people.

Article 2 of Armenia’s Constitution clearly states: “The power in the Republic of Armenia belongs to the people. The people shall exercise their power through free elections, referenda, as well as through state and local self-government bodies and officials provided for by the Constitution.”

Consequently, there cannot be power, including judicial power that fails to represent the people, or the power of which does not stem from the people.

In my capacity of Prime Minister, I consider myself the guarantor of the popular power in Armenia, and I intend to take the necessary steps in order to safeguard that power, and even to appeal to the people’s immediate assistance, if necessary.

And in this respect, I consider it appropriate to comment on the purpose and the rationale behind my call to block the entrances of Armenia’s all law-courts without exception from early morning.

Ladies and gentlemen, dear people, following this statement, I will send live messages mediating my Facebook page to our compatriots who have blocked court entrances.