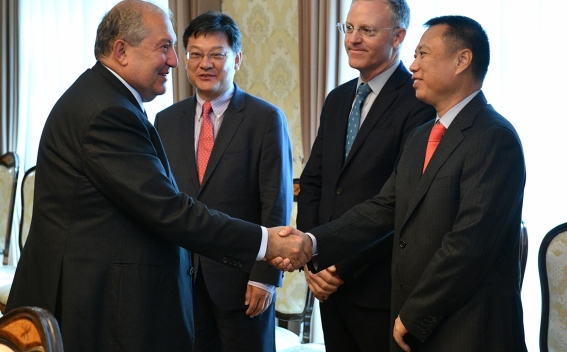 The President of Armenia urged the representatives of the Bank to expand the structure’s programs in Armenia.

President Armen Sarkissian noted with satisfaction that Armenia and the Asian Development Bank are good partners: in recent years, multiple vital programs have been implemented in the public and private sectors.

Noting that this was his first visit to Armenia and to the region in general, the Vice President of the ABD informed that he had been present at the Economic Forum in Astana and was very impressed with the interesting presentation made by the President of Armenia. “Your words inspired all those present,” he underscored. “You spoke about globalization, the 21st century and referred to the most important thing – human capital, artificial logic, and the future, noting that technologies will change a lot. Many discussions on these topics have been held at the ADV, about the future of technologies.”

President Sarkissian said that in the framework of the presidential initiatives, he was intending to launch a number of projects aimed at the future of the country which would enhance education, science, development of new technologies, and artificial logic. Armen Sarkissian spoke also about the idea of making Armenia the financial hub of the region. The interlocutors exchanged views on the possible participation of the Asian Development Bank in the implementation of these programs.