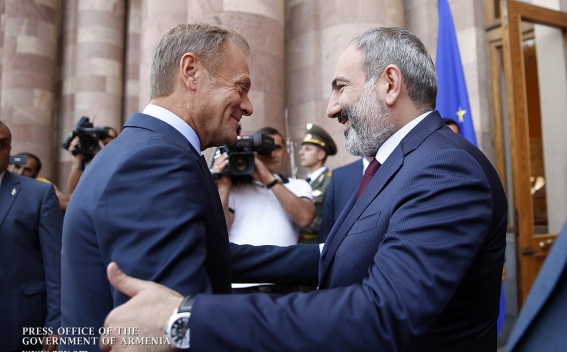 Welcoming the European Council President, Prime Minister Pashinyan noted that the development of relations with the EU is one of the priorities of Armenia’s foreign policy agenda.

“Mr. Tusk, I am glad to meet you again. The European Union is an important partner for Armenia. We are keen to collaborate with the EU in implementing the reform agenda of Armenia, and we are convinced that the Comprehensive and Enhanced Partnership Agreement will help deepen our cooperation. We highly appreciate your personal contribution to the development of Armenia-Armenian Union relations and are grateful for your effective cooperation,” the Prime Minister of the Republic of Armenia said.

European Council President Donald Tusk said he was glad to be in Armenia and meet with the Prime Minister of the Republic of Armenia. “Mr. Prime Minister, this is our first meeting in Yerevan. The European Union, too, appreciates the partnership with Armenia and the ongoing effective dialogue with your government, aimed at expanding and deepening our partnership,” the President of the European Council said.

The interlocutors discussed a wide range of issues on the agenda of EU-Armenia cooperation. Nikol Pashinyan reaffirmed the commitment of the Armenian authorities to establish the rule of law in the country, strengthen democratic institutions and fight corruption. Touching upon the ongoing reforms, the Head of Government dwelt on the steps to form an independent judicial system. The Premier stressed the establishment of an independent judiciary is a priority for Armenia, and the technical and financial assistance provided by European structures, including the European Union, is of great importance in this respect.

Donald Tusk noted that the European side completely trusts the logic of the judicial and legal reforms implemented by the Prime Minister and his government and expressed readiness to back Armenia in implementing these reforms.

Nikol Pashinyan and Donald Tusk next referred to the steps aimed at liberalizing the visa regime between Armenia and the European Union. Prime Minister Pashinyan pointed out that our country is interested in the launch of a substantive dialogue in this direction in the near future. Donald Tusk said that he would convey the Premier’s message to the authorities of EU-member states.

While talking about the process of CEPA ratification by EU-member states, both sides stressed the need for early completion of this process. In this context, Nikol Pashinyan advised that the Prime Minister’s decision was passed on June 1, 2019, approving the roadmap for CEPA implementation.

The interlocutors next talked about the possibility of holding an investment forum. The Prime Minister of Armenia and the President of the European Council exchanged views on regional issues, including the settlement of the Nagorno-Karabakh conflict. Prime Minister Pashinyan assured of Armenia’s commitment to the logic of a negotiated peaceful settlement within the framework of the OSCE Minsk Group Co-Chairs, which is the only internationally recognized format. He thanked the EU for abiding by a balanced position on this issue and supporting the position of the OSCE Minsk Group.

The meeting of the Armenian Prime Minister and the President of the European Council continued in the format of private talks, after which they made statements for the press.

Nikol Pashinyan and Donald Tusk toured the capital city. They walked down the Northern Avenue as far as Europe Square in Yerevan. In conclusion, the Prime Minister of Armenia and the President of the European Council continued their discussion during a working lunch.