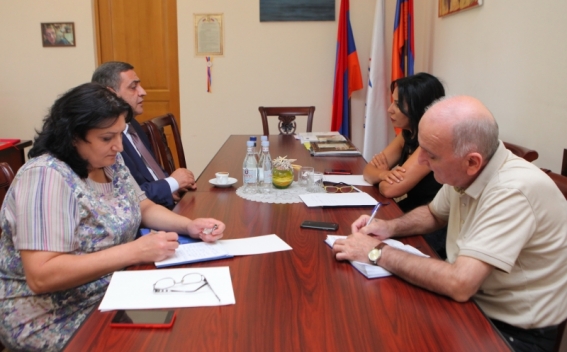 On August 13, the Chair of the RA NA Standing Committee on Protection of Human Rights and Public Affairs, the Head of the RA NA Friendship Group Armenia-Jordan Naira Zohrabyan met with the RA Ambassador Extraordinary and Plenipotentiary to the Syrian Arab Republic and the Hashemite Kingdom of Jordan Tigran Gevorgyan.

Issues concerning the expansion and deepening of the ties between the parliaments of Armenia and Jordan, as well as a number of problems existing on the agenda of the two countries’ relations were touched upon.

Naira Zohrabyan noted that during her visit to Jordan she met with the Princess Rym al-Ali and discussed issues on tourism and boosting of cultural ties.

The Ambassador Extraordinary and Plenipotentiary and the Head of the Friendship Group agreed to discuss also issues relating to the Armenian-Jordanian still unused resource during the designed visit to Jordan.

Naira Zohrabyan informed the Ambassador that she invited the Friendship Group Jordan-Armenia of the Jordanian Parliament to visit our country.