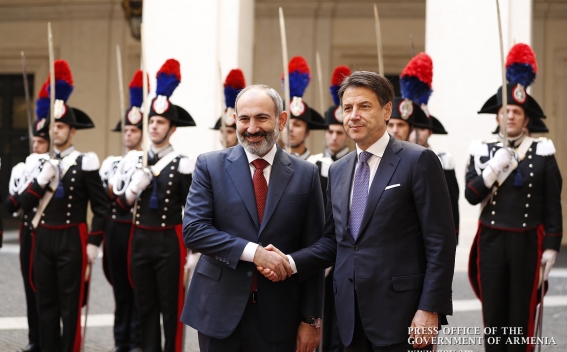 Prime Minister Nikol Pashinyan, who is paying an official visit to Italy, today held high-level talks with Giuseppe Conte, Head of the Council of Ministers of the Italian Republic. The meeting was held at the Palazzo Chigi in Rome, the official residence of the Italian Prime Minister.

During the official welcoming ceremony, the Italian Prime Minister greeted his Armenian counterpart. The Chief Guard of Honor saluted the Prime Ministers; the anthems of Armenia and Italy were played, after which the two Premiers introduced the members of the official delegations.

Later on, the Prime Ministers of Armenia and Italy held private talks, during which Nikol Pashinyan and Giuseppe Conte discussed the course of the Armenian-Italian relations and the development prospects. During the extended-format meeting that followed their private talks, the Armenian and Italian Prime Ministers referred to a wide range of issues of bilateral cooperation.

Giuseppe Conte expressed support for Armenia’s democratic agenda and went on to assure of Italy’s readiness to cooperate closely with our country in promoting the rule of law, the judiciary reform and strengthening democratic institutions.

Thankful for the Italian side’s readiness and valuable contribution to the formation of an anticorruption commission, Nikol Pashinyan highlighted Italian companies’ active participation in our country’s economic life. Confident that the aforementioned initiatives will be continued, the Armenian Premier advised that his government intends to promote investments in every possible way. Pleased with Italy’s initiative to launch negotiations on visa liberalization with the EU, he hailed the improved migration pattern in Armenia.

Nikol Pashinyan and Giuseppe Conte expressed satisfaction with the ongoing Armenian-Italian cultural and educational cooperation, appreciating the effective exchange programs between the universities of the two countries. Down to cultural linkages, Prime Minister Pashinyan attached importance to the exchange of experience with Italy in the field of archeology.

The two heads of government had substantive discussion on international security issues and the situation in Syria. Prime Minister Pashinyan introduced the humanitarian mission carried out by Armenia. The parties noted the compatibility of their respective positions on ways of restoring stability in Syria.

The Prime Ministers of Armenia and Italy next referred to issues of regional security, exchanged views on EU-Iran, Armenia-Iran relations and the Nagorno-Karabakh conflict settlement process. The two prime ministers stressed the importance of interaction within the UN Human Rights Council.