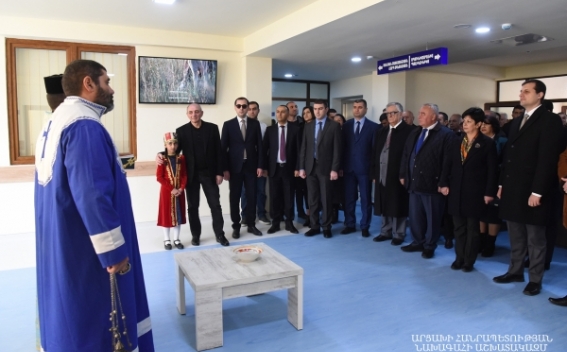 On 16 December Artsakh Republic President Bako Sahakyan participated in the town of Berdzor at a solemn ceremony of opening a new building of the Kashatagh Regional Medical Center after Artsakh Bouniatyan.
The Head of the State noted that expansion and modernization of the contemporary healthcare network in the regions was among the significant socioeconomic tasks set before the state and the activities in this direction would be of a consistent nature.
On the same day the bust of NKR Honored physician Artsakh Bouniatyan was unveiled in the hospital's yard. President Sahakyan underscored the contribution of the prominent physician in the development of the Kashatagh Region noting that his memory would remain bright in the mind of the generations to come.
Minister of state Grigory Martirosyan and other officials partook at the event.