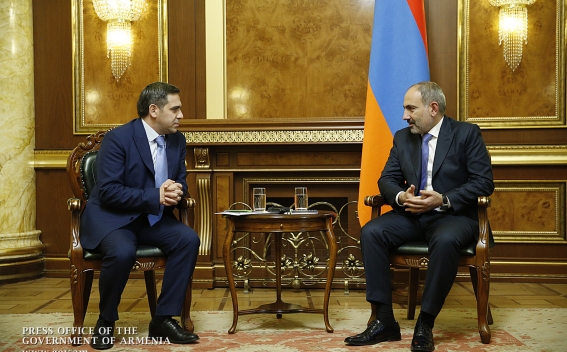 I want to say that football is very important to us for three reasons and in three ways:
First, the development of football is of strategic importance to us because I believe and hope that the fundamental changes underway in the Republic of Armenia should be reflected in football, and in some sense football and the national football team shall translate our national aspirations. Second, I think yesterday’s election of the President of the Football Federation is important because in the context of the fight against corruption, decriminalization of sport and decontamination of sport from corruption is essential for the government.

Unfortunately, in many cases we find that criminal subcultures and corruption circles are penetrating the field of sports, football, and we need to ensure that criminal relations and corruption are excluded here as well. Knowing your way, too, I am convinced that you will be consistent in that respect.

Third, of course, in terms of capacity development, because we have said that the most important issue for the citizens of the Republic of Armenia is capacity building, and football is one of the areas where many young people can find inspiration to develop and use their opportunities. It is crucial for us to develop football infrastructure in the Republic of Armenia as an important attribute of public life.

Of course, the Football Federation operates independently of the Government, but I do think that having a common understanding creates great opportunities for cooperation. The Armenian Football Federation has vast opportunities to cooperate both with the Government and international organizations. I am convinced that there is some untapped potential here and, therefore, I wish you all the best in your activities.”

I am thankful for your kind remarks and congratulations not only on my own behalf, but also on behalf of the football community. We had not had competitive elections in the Football Federation for many years. It happened, and it is an important sign that football in Armenia should go towards healing.

As you know about the mechanisms to fight corruption, you know, and the public has been following these positive developments in European and world football lately. Both in UEFA and FIFA there were scandalous events in 2016, when the FIFA President, the President of CONMEBOL resigned, and the recovery process continues there. Of course, we are also cooperating with international organizations, UEFA and FIFA, and we will do our utmost to avoid such phenomena in Armenia.

We have a vision, our strategy for 2025 sets out our vision to make Armenia more recognizable through football. That is our vision, and we will go that way. The vision also highlights the successful performance of various national teams and the national team in the finals of the European and World Championships. Of course, this is an ambitious plan by 2025, but we will do our utmost to make it possible for infrastructures to develop in Armenia and make football truly a national game that will be for everyone and not for people.”

Touching upon the competitive nature of the latest elections of AFF President, Nikol Pashinyan noted: “In fact it is a very positive change. Indeed, we may not have noticed, for many years I do not remember the election of the President of the Football Federation with more than one candidate. It has never been in the history of the Third Republic, at least it was not visible in the past. In this respect, I think that is exactly the context, and your responsibility is great because, in fact, Armenia is testing a new model of football management and development in Armenia, which had no precedent, perhaps in the world, but we had no precedent in Armenia because the presidents of the Football Federation were either people closely related to the authorities, or subordinates.

It is very important, as you mentioned in your remarks, and I want to emphasize football as a branch of the economy, as a direction of public life, as a platform for national emotional cohesion, where party affiliations, political beliefs, and the development of youth and children opportunities and healthy lifestyles are eliminated. , in general as a direction for the development of a segment of the sport and, of course, as an important component of proportionate territorial development, because we consider it very important The regions will also develop the infrastructure of football not only in football, but football takes place in real life, as we have put in place in Armenia's cultural life, sporting life, including and especially the local football life. Of course, you can count on this support where the government can assist the Federation in resolving these issues. We also hope that the activities of the Football Federation will be within the framework of our strategic vision, I mean the directions I have just mentioned.”

Armen Melikbekyan advised that the AFF had been actively cooperating with state bodies, but closer cooperation is needed, as football must be combined as a social tool and as a branch of the economy in order to rule out the political component. According to him, there have been some positive changes, in particular, as a result of close work with the Ministry of Territorial Administration and Infrastructure, it can be stated in a couple of days that 51 playgrounds with 40/20 size artificial grass are already ready to host players in in different regions of Armenia – 10 - in Vayots Dzor. 13 - in Tavush, 12 - in Shirak, 15 - in Gegharkunik, and one - in Ararat Marz.

The next stage will cover Ararat and Aragatsotn marzes of Armenia. The AFF President said that the program will be continued. There are currently 30 such playground construction projects for 2020, and a social outlier is also considered when constructing playgrounds - the Social Assistance Index and in areas where social programs are needed, a playground has been built, although by other criteria it has not been appropriate for building a playground. As an example, Armen Melikbekyan mentioned the playground built in Khachik village.

The Prime Minister welcomed the construction of playgrounds in the provinces: “I think in the near future we should raise the issue of politicization of football and sport, in general. I think this is one of our next big issues, because in many cases we are trying to serve the specific political and non-political ambitions of certain groups, forces, individuals. Athletes with great services to the state and country should not be allowed to become a background for self-promotion or political processes of some groups or individuals. Indeed, I am pleased that changes like that are taking place in the Federation as the rising generation, strong with new thinking and new strategic perceptions, is taking on responsibility. You have assumed a very important mission.”

The Head of Government extended his congratulations to the other newly elected representatives of the Federation, members of the Executive Committee and officials.