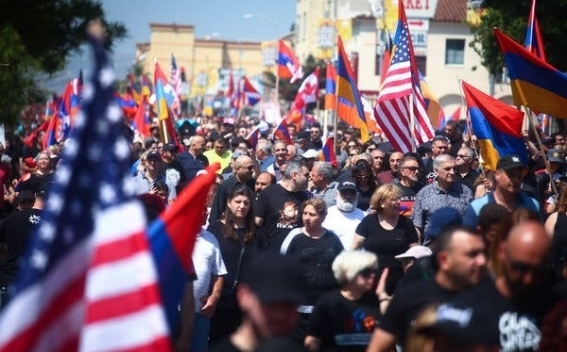 Some activation in Armenian-American relations was noticed in 2019, but no breakthrough was achieved.

In this context, the year was marked by the visit of the US delegation to Armenia on May 7th. During the visit, the first meeting of US-Armenia Strategic Dialogue was convened in Yerevan led by George Kent, Deputy Assistant Secretary of State for European and Eurasian Affairs. In addition to discussions in the areas of science, education, energy, trade, high technology and innovation, tourism, and other areas, during the meeting, the United States and the Republic of Armenia signed assistance agreements of up to $16 million to promote economic growth and good governance.

After the visit of the American delegation on June 19, the official visit of RA Foreign Minister Zohrab Mnatsakanyan to the US took place.  During the visit Armenia’s Foreign Minister met with the US Under Secretary of State for Political Affairs David Hale, the US Deputy Assistant Secretary of State George Kent and the US National Security Advisor John Bolton, during which the sides highlighted the importance of the Armenian-American strategic dialogue, which according to them, gives an opportunity to discuss further steps for expanding the partnership agenda.

Mnatsakanyan's visit was followed by the visit of the Armenian delegation headed by Deputy Prime Minister Tigran Avinyan to the United States. It is noteworthy that a number of preliminary agreements were reached during the visit (for example, the establishment of a 50-member branch of “Service Tighten” in Yerevan, organizing a visit of representatives of the American Business Association to Armenia), however, none of the arrangements have been implemented until today.

By the way, the 12-day working visit of the delegation headed by RA NA Speaker Ararat Mirzoyan to the United States coincided with the visit of the Deputy Prime Minister, which gave rise to heated debates in Armenia. During the visit the RA NA Speaker participated in the Leadership Forum held in Washington. Within the framework of the forum he met with the Speaker of the US House of Representatives Nancy Pelosi, US Senate Republican Majority Leader Mitch McConnell, the US Members of Congress, with whom no agreement was reached within 12 days. Only the details of the “Velvet Revolution” that took place in Armenia a year ago were presented to them.

The second half of the year was marked by RA Prime Minister Nikol Pashinyan's visit to the United States. Despite the fact that since the revolution many were saying that a meeting with the US President Donald Trump was possible, and even at the level of Armenia’s Foreign Minister it has been mentioned that the meeting has become an important issue of the Government’s agenda, nevertheless Pashinyan-Trump meeting did not take place.
During the visit Pashinyan met only with representatives of California State, Los Angeles city authorities and Los Angeles City Hall members during which a memorandum of understanding was signed between the Armenian Ministry of High-Tech Industry and Draper University. And in New York a framework cooperation agreement was signed between the Republic of Armenia and the State of California. Despite the attempts of the Government to show that this agreement is a major achievement, however, it should be noted that the latter is not a legally binding document.

In the second half of the year, Armenia-USA parliamentary friendship group delegation visited the United States. Interestingly, the Head of the Friendship Group Lilit Makunts, announced that during the visit the Armenian parliamentarians also proposed to their colleagues of the Senate and House of Representatives to pass an act in support of Armenia. It should be noted that in October this year, the US House of Representatives has passed a similar document, a bipartisan Georgia Support Act, which will “support the independence, sovereignty, and territorial integrity of Georgia, and for other purposes.”

It should be noted that the much-discussed strategic dialogue does not yet imply strategic relations. Certainly, it is quite positive that a strategic dialogue document has been signed between the Republic of Armenia and the United States, which shows that there has been some positive dynamics in relations, however, it should also be noted that if the United States considers Georgia and Azerbaijan strategic partner countries, then for some reason it considers Armenia only a strategic interlocutor.  And to say that there has been a breakthrough in Armenian-American relations is, to put it mildly, inaccurate.

At the same time, it should be noted that the US Government has increased assistance funding to Armenia in 2019.  The figure for this year is more than $60 million, which represents a 40% increase over last year’s amount, which shows that the United States continues to keep Armenia and the events and developments going on here in the spotlight. Besides, taking into consideration the statement made by US National Security Advisor John Bolton, according to which the South Caucasus is a strategically important region for the United States, improving relations with Armenia can become a very high priority for Trump’s administration.

The adoption of a resolution condemning the Armenian Genocide first by the US House of Representatives and then by the Senate, is also noteworthy.  If the lower house of Congress had passed resolutions recognizing the Genocide in the past as well, this was the first time that the Senate has formally designated the 1915 mass killings of 1.5 million Armenians at the hands of the Ottoman Empire as a genocide. It is undeniable that the Armenian Organizations of the United States have made a great contribution in this regard, but it should not be forgotten that the adoption of this resolution is also a consequence of geopolitical developments. Of course, it was first and foremost a "sanction" against Turkey over Ankara's actions in Syria, the warming of Russian-Turkish relations, and the S-400 deal.

But to "punish" Turkey, it would seem that only the adoption of such a resolution by the House of Representatives would be enough, but not. It is therefore not excluded that recognizing the Armenian Genocide by the whole Congress, the US pursues another, far more important and far-reaching goal for Armenia, which should be in the center of the current authorities’ attention.

As for the role of the United States as a co-chair country of the OSCE Minsk Group, we should note that US remained relatively inactive throughout the year in the settlement of the Karabakh conflict settlement process.