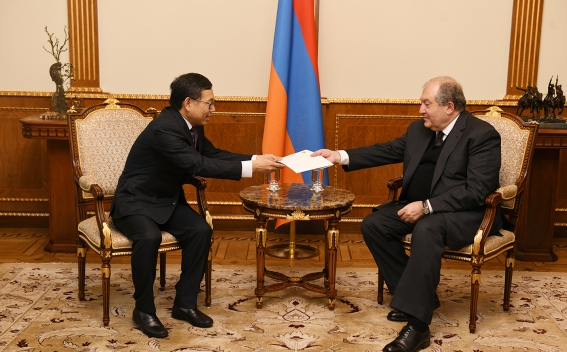 The President of Armenia and Ambassador of China spoke in particular about the situation created by the coronavirus infection and preventive measures. Ambassador Tian Erlong passed to President Sarkissian a letter from the President of China Xi Jinping in which the latter expressed his gratitude to the President of Armenia noting that support of the Armenian side in the fight against coronavirus epidemic has had its impact on the mutual trust at the highest level and friendship of the two nations. “I attach the utmost importance to the development of the Armenian-Chinese relations and stand ready together with you to put efforts to elevate our bilateral relations to a new level for the benefit of our two countries and peoples,” the letter of the President of the People’s Republic of China reads.

At the meeting, the parties hailed the existing level of the interstate relations and expressed confidence that the sides would continue to make efforts aimed at the development of the Armenian-Chinese friendship and expansion of the existing partnership.