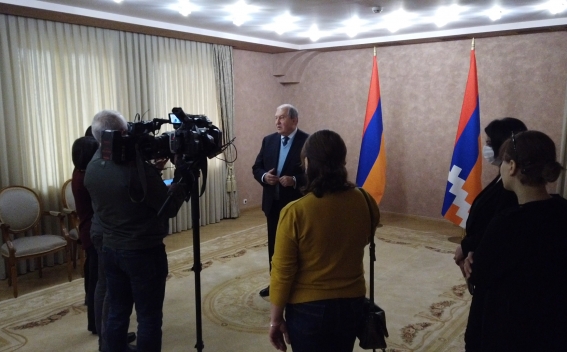 “I visit Artsakh quite often, in a sense, it is like coming home. This is one of my regular visits,” President Sarkissian said during his meeting with journalists in Stepanakert and added that he doesn’t need any special occasion to visit Artsakh. “There are many things to discuss with President Bako Sahakian – the general situation, current situation on the border. We will certainly speak about prospects of Artsakh’s economic development, investment opportunities.”

The President of Armenia said that even though his visit was not related in any way to the upcoming elections in Artsakh, he was interested in how the election campaign has been progressing, what preliminary works have already been done. With the President of Artsakh Armen Sarkissian wants to talk also about that topic. “I am not planning to meet with any of the candidates. However, I might use the occasion to appeal to all candidates, first of all wishing success them all and health to Artsakh in general,” President Armen Sarkissian said. “It is essential to hold free elections, meaning free from external or other factors. It is equally essential for these elections to be fair. The people of Artsakh are heroic people, victorious people. Artsakh had great victories and free and fair election will be another victory. This time, it will be a political victory, to show everybody, but first and foremost to the people of Artsakh, to the entire Armenian nation, to Artsakh and Armenia, to the friends of the Armenian people and those who are not friends but opponents or enemies that this state, the Republic of Artsakh is strong, and has excellent, well-organized structures. This country is strong not only with its small but important economy, its Army, and dedication. It is also a democratic, modern state, and actually the entire process of the resolution of the Artsakh problem has only one solution – a storng and powerful Republic of Artsakh. These elections can have a very significant, important input to that vital process because victories happen not only on the battlefields but also on the political and international fields. And the future president of the Republic of Artsakh and his colleagues should carry also that load on their shoulders.

Victories happen also in families, when all members of the family are happy about the place they live in, country they live in, are glad that whatever is happening in a big family is fair. Don’t forget that freedom, justice, fair elections will become guarantees of security of the Republic of Artsakh because the new leaders, who will come, will be standing strong, more confident.

Even one single vote of the heroic people of Artsakh carries value, thus, regardless of how many votes each of the candidates will receive, these are votes belong to them, these are votes of confidence of the people of Artsakh. There are individuals among the candidates who proved with their life that they are brilliant sons of this nation represented in different fields.

It is essential that the country emerges from these elections more organized, disciplined, more united.

The people of Artsakh must win in this battle. They won at the battlefield, won in statebuilding, and I am confident will win during these political elections.”

President Sarkissian spoke also about the coronavirus and noted that Artsakh must defeat also this global calamity. “Since there is no general medicine which treats human beings, regardless of their nationality of the coronavirus, we use our old, familiar to all people medicine,” the President of Armenia said. “In simple words, that medicine first and foremost is care. To put it simply, care is the utmost medicine because the coronavirus affects predominantly ailing and senior individuals. It means that it is necessary to treat them with love and care, those who are weak and old.

The second is responsibility. I appeal especially to the young who cope with such illesses more easily; however, it doesn’t mean to be irresponsible, because being a potential carrier of the disease you are not prone from infecting your close circle and relatives. Thus, care, responsibility, discipline and being organized.

No doubt the state has a role to play too, and with this regard, I believe, we will have time to speak about it with the President. I will be happy to pass on the experience, knowledge which I myself have acquired recently speaking to the leaders of different states, ministers of healthcare, and scientists. I do it almost on a daily basis, trying to keep Armenia’s international connections in the area of healthcare. We need assistance, medications, tests, masks. But first of all we need experience, positive as well as negative on how to fight the coronavirus. I see as my duty to pass to Mr. President that experience, my conversations with presidents of various states and international healthcare organizations so that Artsakh gets ready.

This is another battle or war which we are fighting against an invisible enemy, which, by the way, is a global enemy. It is critical how we emerge from that fight. There will be countries which will prevail, i.e. will have minimal losses; there will be countries which will have major losses, which means in some way they will be defeated. I hope that Armenia and Artsakh will emerge from this major challenge victorious, with minor losses. I wish our people of Artsakh, all our compatriots first and foremost good health.”