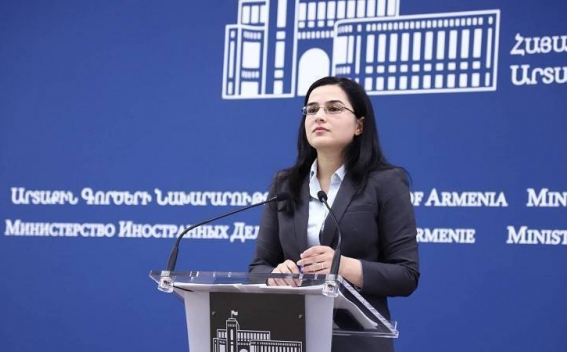 he Armenian Foreign Ministry spokesperson issued a statement on the situation at the Upper Lars checkpoint on Georgia-Russia border.

"We reiterate that according to the decision of the Government of Georgia, foreign nationals, including the citizens of Armenia, cannot enter the territory of Georgia, including through the Upper Lars checkpoint. The Upper Lars checkpoint is open exclusively for cargo transport, as well as to Russian and Georgian citizens returning to their homeland from the Russian Federation and Georgia respectively.

Additionally, in the result of negotiations with our Russian and Georgian counterparts and thanks to their good will, it became possible to ensure the transfer of approximately 140 citizens of Armenia stuck at the Upper Lars checkpoint by March 20, as of 8pm, to Armenia through the territory of Georgia.

This one-time transfer of the citizens of Armenia was carried out by 5 buses and 4 minibuses, and the cars of the citizens of Armenia, thanks to the efforts of the Consulate General of Armenia in Rostov-on-Don, were deployed in a special parking area with 24-hours surveillance. I’d like to once again underscore that this transfer was carried out on an exceptional basis and the land border between Armenia and Georgia is closed for foreign passengers.

As already mentioned, the Consul General of Armenia in Rostov-on-Don Vardan Asoyan has been at Upper Lars checkpoint for these three days, where he coordinated activities of providing the citizens of Armenia with food and essentials, answering questions of our citizens’ concern and assisting in addressing other issues.

We are grateful to all those citizens, who in this critical situation have demonstrated reasonable approach and understanding, and thus have supported the work of our diplomats. We urge all our citizens who appeared in such situations to demonstrate a high level of civic consciousness, not to yield to provocations, and not to interfere with the work of our diplomats, which is first of all committed to overcoming the critical situation."