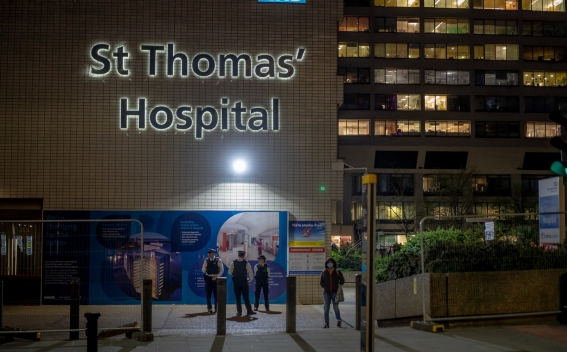 Prime Minister Boris Johnson of Britain was moved out of intensive care on Thursday, a ray of hope for a country that faces several more weeks under lockdown as its death toll from the coronavirus approached 8,000, The NYT reports.

Mr. Johnson was hospitalized on Sunday evening after a 10-day bout with the virus and transferred to the intensive care unit on Monday after his condition deteriorated. On Thursday, Downing Street said the prime minister, 55, had been moved back to a ward at St. Thomas’ Hospital in London and was in "extremely good spirits."

Dominic Raab, Britain’s caretaker leader, said that Mr. Johnson had made "positive steps" in his recovery, though he offered no timetable for when he might return to work. He also signaled that the government would extend the country’s lockdown beyond next week.

Mr. Raab, the foreign secretary deputized by Mr. Johnson to carry out his duties, said the government would not lift restrictions on April 13, the date the prime minister had set when he imposed the measures last month. The lockdown now appears likely to last several more weeks.

"Is it time to ease up on the rules?" Mr. Raab said to reporters at 10 Downing Street. "We’re not done yet. We’ve got to keep going."

Mr. Raab said he had not spoken to Mr. Johnson since he was hospitalized on Sunday night. Now that he is out of intensive care, the prime minister "will receive close monitoring during the early phase of his recovery," the government said in a statement.

Despite the good news, Mr. Raab appeared to be adjusting to the reality that Mr. Johnson will still be convalescing as the government faces one of the most sensitive decisions of the pandemic: when, and how, to reopen the British economy.

The cabinet plans to make that assessment at the end of next week.