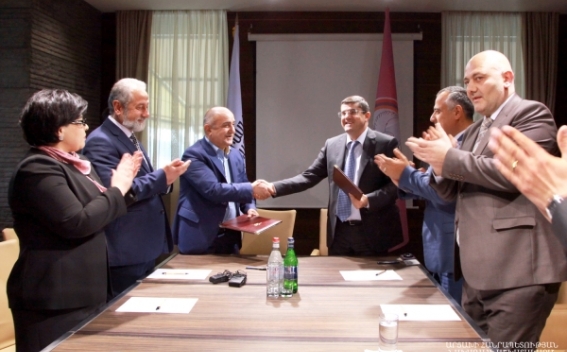 On 25 May Artsakh Republic President Arayik Harutyunyan on behalf of the "Azat Hayreniq - UCA" parties coalition led by him, signed a memorandum of cooperation with the "United Homeland" party leader Samvel Babayan.
President Harutyunyan noted that cooperation between political powers is intended to preserve the solidarity in the country and make joint efforts on realizing the program strategies.
Arayik Harutyunyan also mentioned that the "Azat Hayreniq - UCA" parties coalition is ready to collaborate within the set agenda with other parliamentary and extra-parliamentary forces.
In his speech Samvel Babayan also considered the importance of cooperation underlining that it is demanded especially to effectively withstand the domestic and foreign challenges the homeland faces.