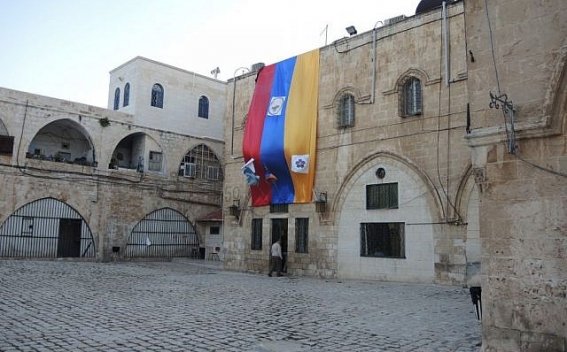 In recent years, Turkey tries to spread its influence also in Israel. In particular, on high state level Turkey conducts extensive activity within Jerusalem’s Old City and is specifically targeting the Armenian and Christian Quarters.

In an article published by Jewish Press a few months ago the Armenian community of Jerusalem has expressed concern that Turkish officials are not only trying to prevent the recognition of the Armenian Genocide in Israel, but are also trying to take over the Armenian Quarter.

A Jerusalem Armenian, whose grandfather had survived the Armenian Genocide, told TPS that a Turkish female diplomat tried to convince him to drop his activities for the recognition of the Armenian Genocide. In their turn, Armenian property owners in Jerusalem said that Turkish government representatives recently offered them $3,000 grants for their various needs. However, Armenians rejected the Turkish bribes, calling them “silencing grants”. Moreover Turkish government also manifest in its activity to acquire Armenian assets. The residents of the Armenian Quarter were shocked to find that one of their homes was sold to a Muslim, in three times its real value. An inquiry revealed that funding for the purchase of the Armenian property came from Turkey.

There are a lot of concerns on this issue. However, it seems, not enough steps are being taken to allay these concerns and neutralize the challenges.

Not only the Armenian Patriarchate of Jerusalem and the Armenian community, but also the government of the Republic of Armenia must counter Turkish anti-Armenian attempts.  The government must use all diplomatic channels, as well as all the potential of the Diaspora, to resist the Turkish encroachments on the Armenian Quarter of Jerusalem.