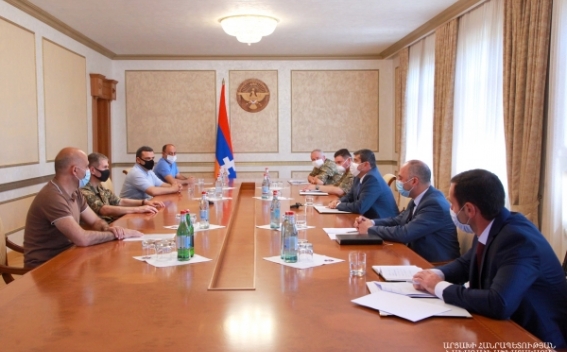 On 16 June Artsakh Republic President Arayik Harutyunyan convened a working consultation on the topic of food supply to the Defense Army.
Head of the General Staff of the Republic of Armenia Armed Forces Onik Gasparyan, Artsakh Republic Defense minister Jalal Harutyunyan, minister of Agriculture Ashot Bakhshiyan, minister of Economy and Industrial Infrastructures Levon Grigoryan, representatives of the Defense Army food supply companies and other responsible officials partook at the consultation.
Highly appreciating the recent reforms in the organization of food supply to the Defense Army, the President noted that the Artsakh Republic Government is interested in increasing the types of locally produced agricultural products in the supply program.
"In the recent decade the achievements in this direction have been evident, however, increasing the stipulated volumes and involvement of new companies to the food supply process will further encourage the local production," said President Harutyunyan.
Possibilities of cooperation between the army and the private sector and existing state assistance programs in this direction were on the consultation agenda.