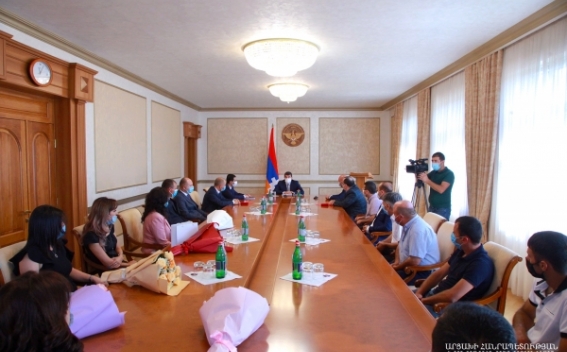 On 7 August Artsakh Republic President Arayik Harutyunyan received a group of construction sphere representatives on the eve of their professional holiday.
The Head of the State rated high the achievements registered in the field of municipal engineering underlining the crucial role of both the responsible officials of corresponding state institutions and the staff of construction companies.
The President noted in his speech that today the construction field is among the prior directions of the Government, expressing confidence that workers of the sphere will do their best for proper implementation of the outlined programs.
At the same time the President assured the attendees that the authorities will consistently struggle for eliminating the existing mispractices. "Our goal is to create an effective and transparent system. Those, who will deviate from the chosen path, will be held accountable before the law",- emphasized Arayik Harutyunyan.
For the contribution to the sphere and in connection with the professional holiday the republic's President handed in awards and valuable gifts to a group of Artsakh Republic Municipal Engineering Ministry workers as well as to representatives of several companies conducting intense activity in the sphere.