Statement by Zohrab Mnatsakanyan, Minister of Foreign Affairs of the Republic of Armenia, at the 12th Ministerial Meeting on the Responsibility to Protect 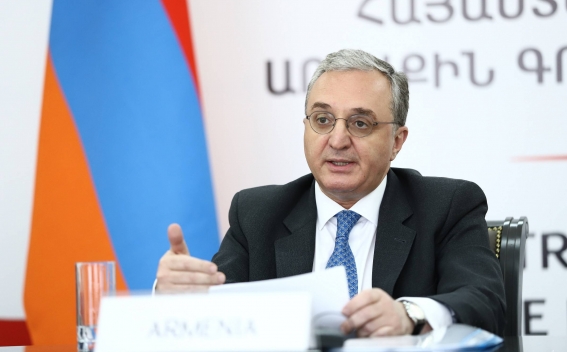 As a member of the UN Human Rights Council, Armenia enlisted among its priorities the contribution to global efforts to prevent genocide and strengthening the United Nations Office on Genocide Prevention and the Responsibility to Protect. Sustained and effective functioning of the Office remains a compelling priority today, Foreign Minister Zohrab Mnatsakanyan said in his remarks delivered at the 12th Ministerial Meeting on the Responsibility to Protect.

I want to start by expressing my deep appreciation to the co-hosts-Denmark, Costa Rica and Qatar for this initiative of gathering twelve ministers, though virtually. And particular appreciation and gratitude to an old friend, good friend and relentless activist in promoting the prevention agenda globally, dr. Simon Adams. Thank you so much.

Fifteen years ago we altogether the UN member states endorsed the responsibility to protect as a firm political commitment to protect populations from massive and atrocious crimes, including the crime of genocide.

The responsibility to protect is both a political and a moral commitment. Together with the legal obligations deriving from the Convention of the Prevention and Punishment of the Crime of Genocide, it is a significant tool of prevention.

As a member of the UN Human Rights Council, Armenia enlisted among its priorities the contribution to global efforts to prevent genocide and strengthening the United Nations Office on Genocide Prevention and the Responsibility to Protect. Sustained and effective functioning of the Office remains a compelling priority today. In 2015 Armenia led the global efforts to designate 9 December as the International Day of Commemoration and Dignity of the Victims of the Crime of Genocide and of the Prevention of this Crime.

By this we have provided together collectively an additional platform to develop and invest in our collective efforts for the prevention agenda. We have been consistently outlining the importance of strengthening capacities at both national, regional and international levels to detect and act on warning signs, which may lead to massive crimes, and the  necessity to prevent genocide and other mass atrocities at early stages. All Genocides could have been prevented, whether it is the Armenian Genocide, the Jewish Holocaust, the Rwandan Genocide or other atrocity crimes.

Dissemination of hatred, intolerance, radicalism, war propaganda, incitement to and actual discrimination against racial, national, ethnic, religious and all other minorities, as well as targeted attacks against civilians continue to shape present realities in different parts of the world. The international community, the United Nations and its Member States are still ill-prepared to respond in a timely and decisive manner to these signals of trouble.

It is a matter of serious concern that the international community may afford inaction to the language of threats, wherein denial and justification of past genocides, laced with aggressive and abusive vocabulary of certain political leaders about “lessons” that victims across generations should not forget; it is most disturbing. Future perpetrators interpret silence to such barbaric disregard of the norms of a civilized world as a license to kill.

Under no circumstances sovereignty can be a safe haven for perpetrating gross and grave human rights violations against those who are peacefully exercising their human rights, including the right of self-determination. No nation can be afforded the right to kill behind the thick curtain of sovereignty. The responsibility to protect is critical in this regard, as it reminds that sovereignty is not a license for impunity but a responsibility. Sovereignty should be exactly the primary and most functional level for the effective implementation of the responsibility to protect. International cooperation to strengthen national capacities to protect remains important as ever.

Respect for human rights is an integral part of a democratic society. It is important to implement human rights obligations and commitments and to cooperate closely with the UN human rights mechanisms. In this context, it is also important to stress the role of the civil society in advocacy, early warning, training and education. And once again I want to emphasize the important role that the Global Center has been continuously playing in this regard. Such priorities were underlined in the resolution on the Prevention of Genocide presented by Armenia and unanimously adopted by the Human Rights Council in June 2020.

Since 2015 Armenia has been regularly hosting Global Forums against the Crime of Genocide, gathering prominent scholars and practitioners of genocide prevention from across the world. This is our unwavering commitment and contribution to building a global community against the crime of genocide and other mass atrocities.

The upcoming 4th Global Forum will be dedicated to the theme of “Women and Girls: Challenging Victim Paradigm” and will address the root causes and consequences of the genocidal violence against women and girls. The conference will pay attention to the necessity of preventing sexual and gender based violence and prosecuting offenders.

The prevention of mass atrocity crimes is a responsibility that falls to all of us and we will continue our efforts to actively contribute to advancing the global prevention agenda.